I now have a few crossover plates in the works to hold the upgraded suspension in place. See the front wheel of the robot on your right. The bottom side is held in place with a crossover to go from the beam to a 1/4 inch bearing mount. The high side uses one of the hub mount brackets which are a fairly thick alloy and four pretapped attachment blocks. To that I screw my newly minted alloy blocks which have a sequence of M8 sized holes in them. I was unsure of the final fit on the robot so made three holes to give me vertical variance to help set the suspension in the place that I want. 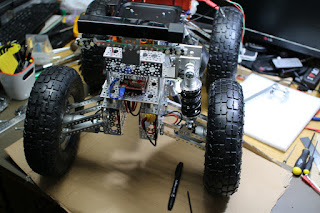 Notice that the high tensile M8 bolt attached to the top suspension is at a slight angle. In the end the top of the suspension will be between the two new alloy plates. But to do that I need to trim some waste from the plates, but to do that I needed to test mount to see where and what needs to be trimmed. I now have an idea of what to trim for a final test mount ☺.

Below is a close up view of the coil over showing the good clearance from the tire and wheel assembly and the black markings on the top plate giving an idea of the material that I will be removing so that the top tension nut on the suspension clears the plate. 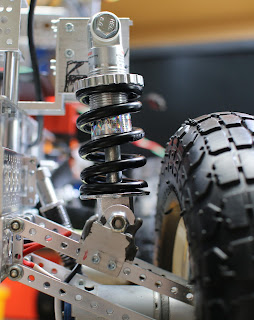 The mounting hole in the suspension is 8mm diameter. The bearing blocks are for 1/4 inch (~6.35mm) diameters. For test mounting I got some 1/4 inch threaded rod and hacked off about what was needed to get clear of both ends of the assembly. M8 nylock nuts on both sides provide a good first mounting for testing. The crossover plate that I made is secured to the beam by two bolts. At the moment the bearing block is held to the crossover by JB Weld only, I will likely use that to hold the piece and drill through both chunks of ally and bolt them together too. It's somewhat interesting how well these sorts of JB and threaded rod assemblies seem to work though. But a fracture in the adhesive at 20km/h when landing from a jump without a bolt fallback is asking for trouble. 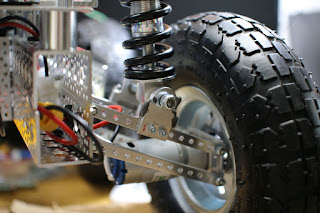 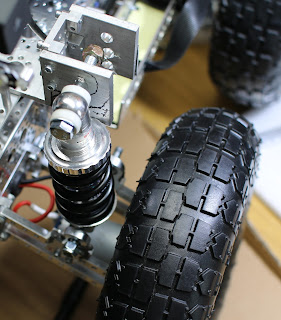 So now all I need is to cut down the top plates, drill bolt holes for the bearing to crossover plate at the bottom, sand the new bits smooth, and maybe I'll end up using the threaded rod at the bottom with some JB to soak up the difference from 1/4 inch to M8.

Oh, and another order to get the last handful of parts needed for the mounting.

Posted by monkeyiq at 7:48 PM No comments:

After getting Terry the robot to navigate around inside with multiple Kinects as depth sensors I have now turned my attention to outdoor navigation using two cameras as sensors. The cameras are from a PS4 eye which I hacked to be able to connect to a normal machine. The robot originally used 5.4 inch wheels which were run with foam inside them. This sort of arrangement can be seen in many builds in the Radio Controlled (RC) world and worked well when the robot was simple and fairly light. Now that it is well over 10kg the same RC style build doesn't necessarily still work. Foam compresses a bit to easily.

I have upgraded to 12 inch wheels with air tube tires. This jump seemed a bit risky, would the new setup overwhelm the robot? Once I modified the wheels and came up with an initial mounting scheme to test I think the 12 inch is closer to what the robot naturally wants to have. This should boost the maximum speed of the machine to around 20km/h which is probably as much as you might want on something autonomous. For example, if your robot can out run you things get interesting. 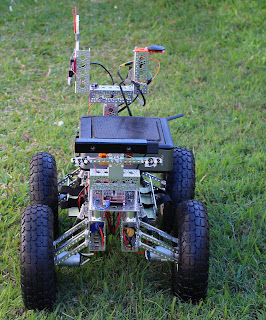 I had to get the wheels attached in order to work out clearances for the suspension upgrade. While the original suspension worked great for a robot that you only add 1-2kg to, with an itx case, two batteries, a fused power supply etc things seem to have added up to too much weight for the springs to counter.

I now have some new small 'coil overs' in hand which are taken from mini mountain bike suspension. They are too heavy for what I am using, with around 600lb/inch compression. I have in mind some places that use coil overs in between the RC ones and the push bike ones which I may end up using. Also with slightly higher travel distance. 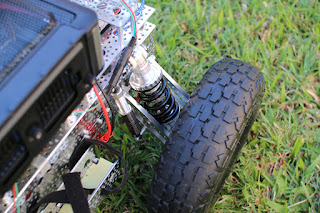 As the photo reveals, I don't actually have the new suspension attached yet. I'm thinking about a setup based around two bearing mounts from sparkfun. I'd order from servocity but sfe has cheaper intl shipping :o Anyway, two bearing mounts at the top, two at the bottom and a steel shaft that is 8mm in the middle and 1/4 inch (6.35mm) on the edges. Creating the shafts like that, with the 8mm part just the right length will trap the shaft between the two bearing mounts for me. I might tack weld on either side of the coil over mounts so there is no side to side movement of the suspension.

Yes, hubs and clamping collars were by first thought for the build and would be nice, but a reasonable result for a manageable price is also a factor.