A slightly more readable version of the data from the linux-raid mailing list. RAID-6 is the surprising one here, the rewrite performance taking the cake over all the RAID-10 configurations. So much for parity RAID being slow for writes ;-0 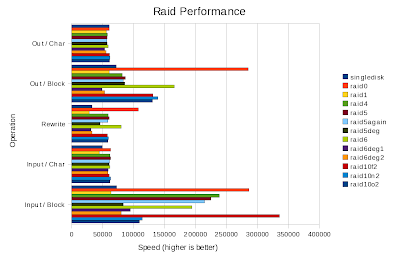 How now is soon?

Well, the main libferris site has now moved to libferris.com. And there was singing and dancing etc.

In other news, the maemo port is getting a little stronger. The db4 indexing modules can handle indexing about 15-20 music files / second on the device itself. Of course search is nice and snappy, but the lack of prelinking problem still remains slowing down actual process spawning. Ferris can now be compiled without Xalan-C which brings its footprint down a little on the device. Still a few other things I might trim off to make things a little nicer on limited hardware. The debs still weight in at about 6.3Mb which is quite chunky for a device with an initial filesystem size of 256Mb.

Still, using a forked child process an app can quite nicely fire off many index searches and sidestep the prelink issue after the initial exec() is done and dusted. Still no panel integration stuff but the fun begins once the port itself works acceptably. Mounting the GPS anyone?
Posted by monkeyiq at 6:53 AM No comments:

So the virtual filesystem that mounts XML, db4, postgresql and even emacs now runs on the n810. There are some initial performance issues, Nokia seems to have decided to drop prelink packages which were in earlier maemo distros. This is quite annoying because small apps like ferrisls actually spend more time in the dynamic linker now than running on the 810. Nothing that can't be fixed with prelink on the n810 and maybe GNU Hash linking style as well. But these things are annoying because it means you have to probably replace your binutils on the device and install prelink from a third party repo (mine, most likely).

But the glory of running XUpdate XQueries on the n810 is still there. Federated indexing from the device instead of the "lets index everything in a static manner" that seems to be the MO for maemo apps at the moment.

I've not tested the mounting of flickr/23hq from the maemo build but having ferris on the 810 should let me integrate "send to" flickr items in application context menus. Once I get the performance issues under control then such handy integration will be on the cards.

Now all I need is a mokophone with 32gb of flash for media (I can dream eh?) so I can taint it with libferris as well.

I'll probably start a target for embedded ferris soon so that more server oriented things like XSLT and XQuery can be trimmed out to provide a smaller footprint VFS/Index solution.
Posted by monkeyiq at 1:15 AM No comments: