Since the A10 chip has floating point support in hardware, I thought I'd bring my "little machine" experience kicking and screaming into the 486DX era... After reading around I found a thread on Linaro 12.06 armhf and was soon up and running on the minix 1gb machine.


For an initial test I ran the following
time cjpeg -quality 90 img_01_l.pnm >| out.jpg
on a sample jpeg image from Nikon at
http://imaging.nikon.com/lineup/dslr/d3s/sample.htm

Three machines for cross comparison, an Intel 2600k, an kirkwood 2ghz running debian armel, and the Linaro hard float on the minix running an A10 at 1ghz.

So you can see a clear advantage for the hardfloat; a chip at twice the clock rate needs 2.6x the time to perform the same process.

Posted by monkeyiq at 7:17 AM No comments:

So I got to tinker with one of the miniand Xplus devices. About $100 lands you an A10 with 1gb of RAM and a HDMI output. Comes with android 4 and is very easy to get to run Fedora 17.

Under android this thing ranges down to 2 watts with wifi up, around 3 under moderate use and 4 watts with a reasonable browser load put on it (mjpeg streaming to firefox). All with wifi up. 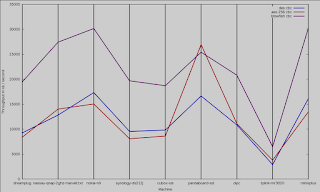 My growing little "openssl speed" comparison now has another value point. For ciphers this A10 does about as well as an n9. For md5 shown below, it is the best cat in the camp by a good way: 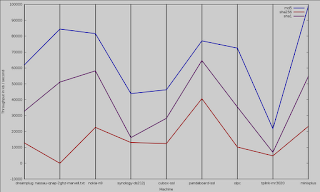 The next tests will be the floating point and simd stuff, which is why I'm interested in the chip. One little discovery, the wifi seems to be very short range, the nexus 7 is happy to connect to one of my APs but I get the minix dropping the connection all the time to that AP from the same room. Don't let the cute aerial fool you it seems.