So libferris is now compiled and installed thanks to some of my handy work on Portfiles and macports doing the heavy lifting. I've put the Portfile into the distribution for many of the repositories; ferrisloki, ferrisstreams, stldb4, ferris, fampp2. And moved the source control over to the github -- https://github.com/monkeyiq/ferris

It's still a bit of a bumpy compile for ferris itself. Using clang instead of gcc, using the different stdc++ lib, the lack of some API calls on osx relative to Linux and the assumptions I'd made that IPC, advising the kernel on IO patterns, memory mapping and again advising on page patterns, would all be available APIs and contants. I have a patch from the compile which I need to feedback into the main libferris repo, making sure it still works fine on Linux too.

So now I can dig into xml files from the command line on osx too. I have to test out the more advanced stuff and the web services. The later use some of the 'Q' magic dust, qjson, qoauth, qtnetwork et al so they should be fairly robust after the port.

I should also update the primary file:// handler in libferris to use some of the osx apis for file monitoring etc to be a friendlier citizen on that platform. But going from no ferris on osx to some ferris is a great first move. A bundle would be the ultimate goal, /Applications/Ferris install in a single drag and drop.

Posted by monkeyiq at 4:43 AM No comments:

It all started with wanting to use a Kinect or other RGBD (Depth sensing) camera to do navigation... Things ended up slowly but surely with moving from a BeagleBone Black and custom nodejs script that I created as the heart to a quad core atom running ROS and many ROS nodes that I created ;) 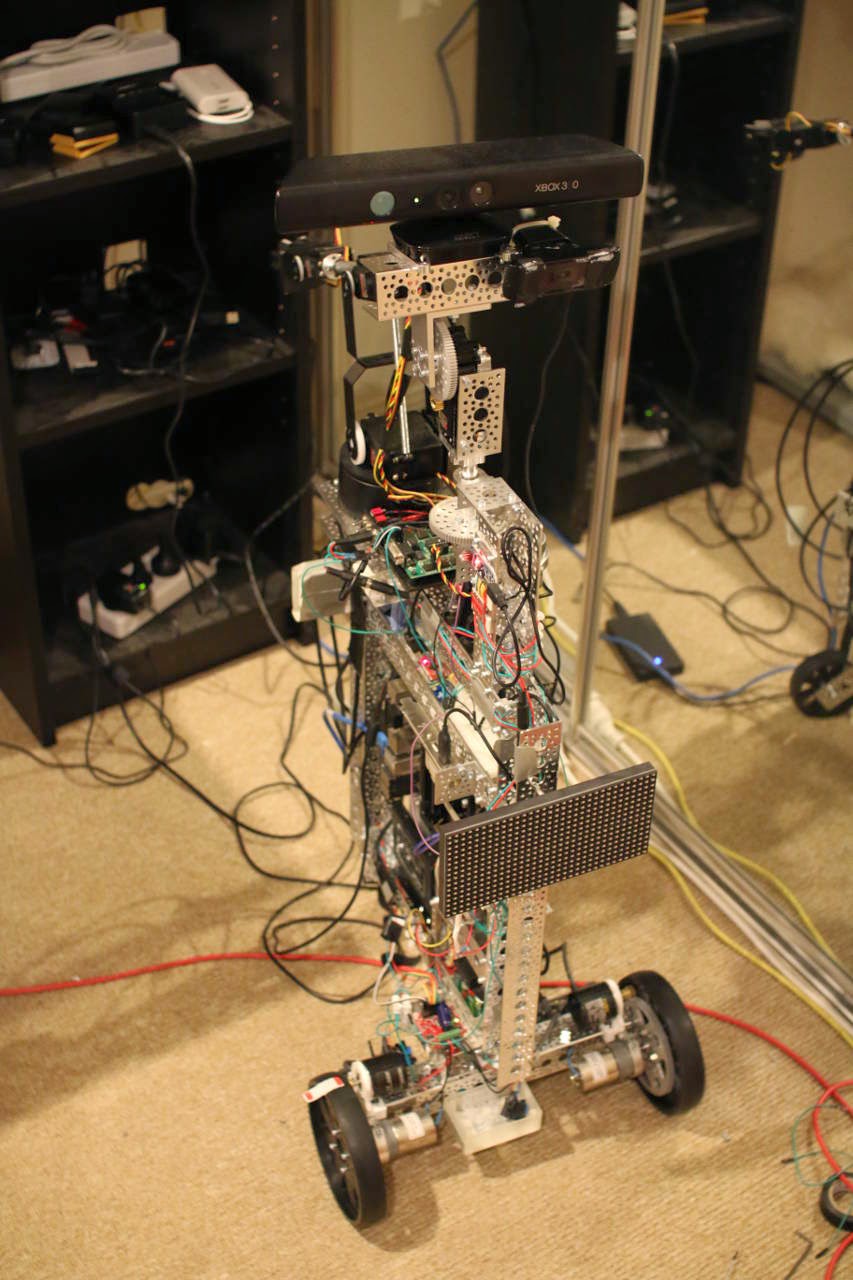 The main gain to ROS is the nodes that other people have written. If you want to convert RGBD to a simulated laser scan in order to do 2d navigation then that's already available. If you want to make a map and then use it then that code is already there for you. And the visualization for these things. I'm not sure I'd have the time to write from scratch a 3d robot viewer and visualize my cut down 'fake' 2d laser scan data from the Kinect in OpenGL. But with ROS I got the joy of seeing the scan change in real time as Terry sensed me move in front of it.

I now have 3d control of the robot arm happening, including optional sinusoidal encoding of movements. The fun part is that the use of sinusoidal can be enabled or disabled without any code changes. I wrote that part as a JointTrajectory shim. For something to use smoother movement all it has to do is publish to that shim instead of directly to the servo controller itself. The publish and subscribe parts of the IPC that ROS has are very easy to get used to and allow breaking up the functionality into rather small pieces if desired. 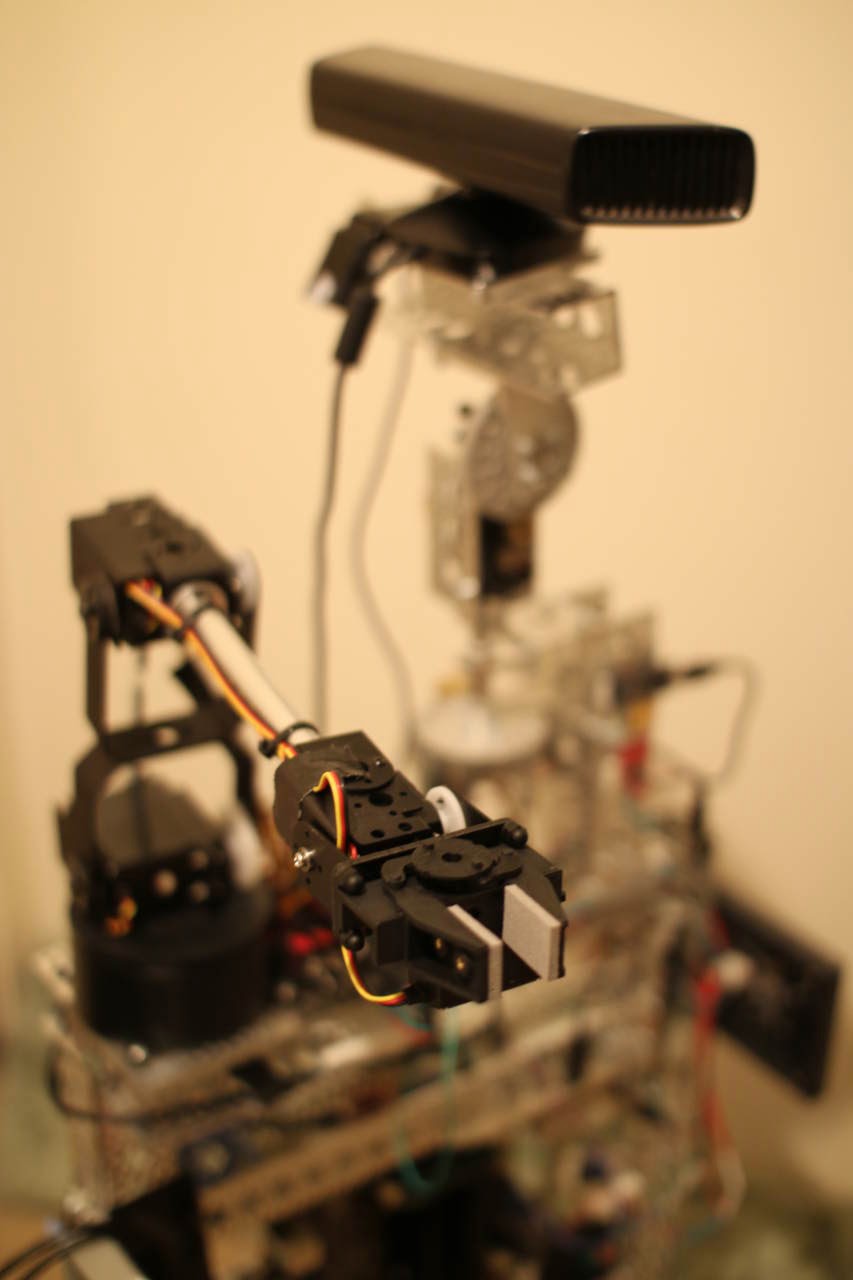 The arm is one area that is ROS controlled, but not quite the way I want. It seems that using MoveIt is indicated for arm control but I didn't manage to get that to work as yet. The wizard only produced an arm that would articulate on one joint, so more tinkering is needed in that area. Instead I wrote my own ROS node to control the arm. It's all fairly basic trig to get the gripper at an x,y,z relative to the base of the arm. And an easy carry over to fix the gripper at a horizontal to the base no matter what position the arm is moved to. But in the future the option to MoveIt will be considered, can't hurt to have two codepaths to choose from for arm control.

As part of the refresh I updated the pan unit for the camera platform.Previously I used a solid 1/4 inch shaft with the load taken by a bearing and the gearmotor turning the shaft directly from below it. Unfortunately that setup has many drawbacks; no ability to use a slip ring, no torque multiplication, difficulty using an axle end rotary encoder IC to gain real world position feedback. The updated setup uses a 6 rpm gearmotor offset with a variable motor mount to drive a 24 tooth brass gear. That mates with an 80 tooth gear which is affixed to a hollow 1/2 inch alloy tube. As you can see at the top of the image, I've fed the tilt servo cable directly into the inside of that tube. No slip ring right now, but it is all set to allow the USB cable to slip through to the base and enable continuous rotation of the pan subsystem. So the Kinect becomes a radar style. One interesting aside is that you can no longer manually rotate the pan system because the gearmotor, even unpowered, will stop you. The grub screw will slip before the axle turns. 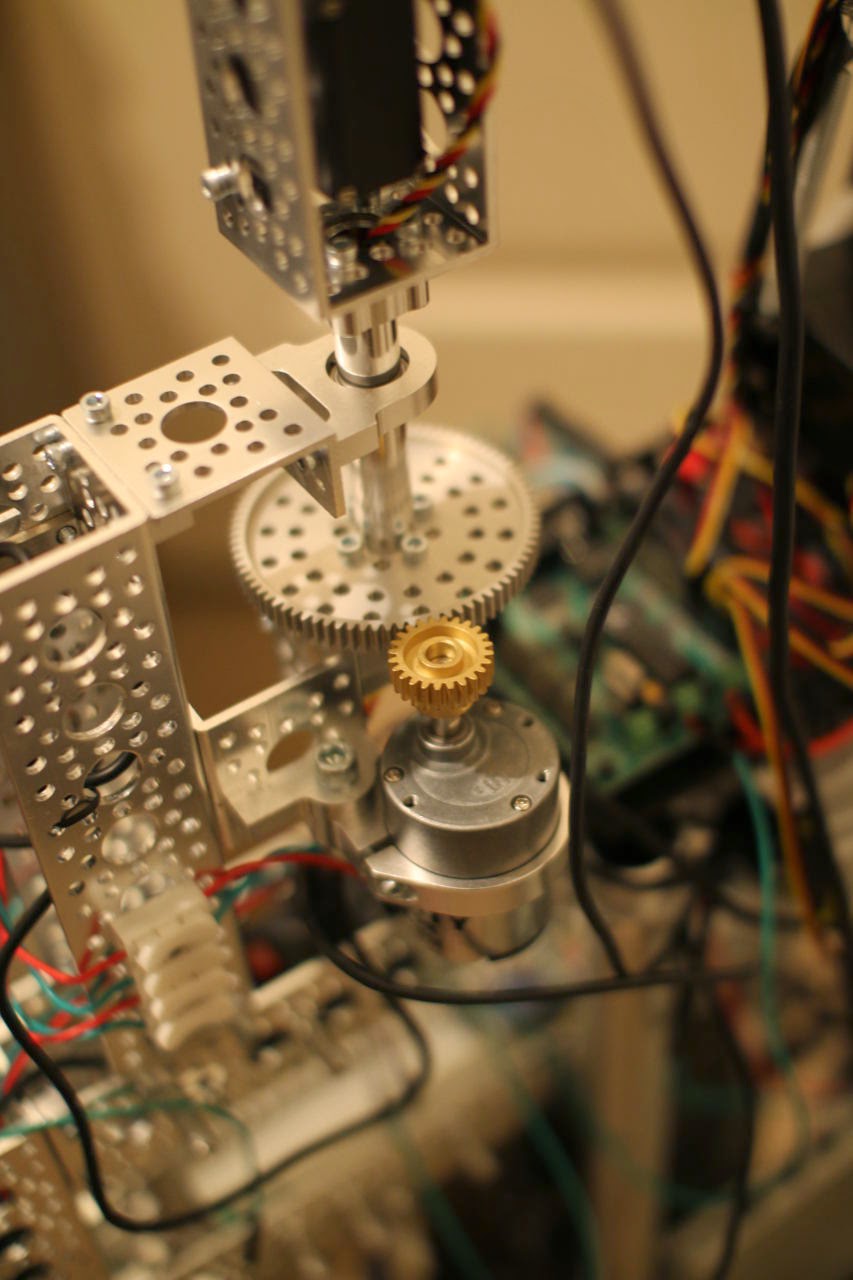 As shown below, the gearmotor is driven by an Arduino which is itself connected to a SparkFun breakout of the TB6612FNG HBridge IC. This combo is attached using double sided 3M tape to a flat bit of channel. Then the flat bit of channel is bolted to Terry. I've used this style a few times now and quite like it. A single unit and all it's wires can be attached and moved fairly quickly. 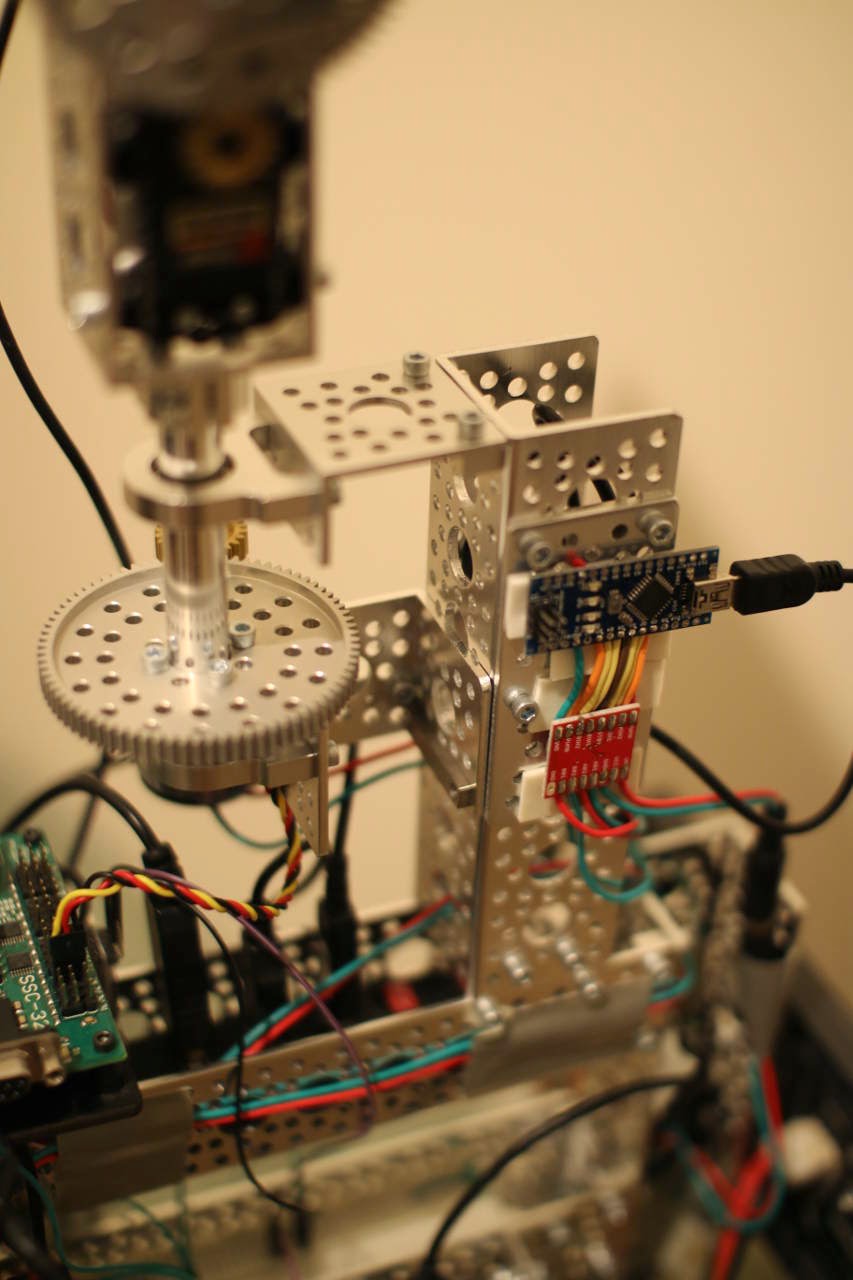 At first I thought the Arudino gearmotor control and the Web interface would be a bit outside the bounds of ROS. But there is an API for Arduino which gives the nice publish and subscribe with messages that one would expect on the main ROS platform. A little bit of python glue takes the ttyUSB right out of your view and you are left with a little extension from the main ROS right into the MCU. I feel that my 328 screen multiplexer will be updated to use this ROS message API. Reimplementing packeting and synchronization at the serial port level becomes a little less exciting after a while, and not having to even think about that with ROS is certainly welcome.

Below is the motherboard setup for all this. Unfortunately many of the things I wanted to attach used TTL serial, so I needed a handful of USB to TTL bridges. The IMU uses I2C, so its another matter of shoving a 328 into the mix to publish the ROS messages with the useful information for the rest of the ROS stack on the main machine to use at its will. 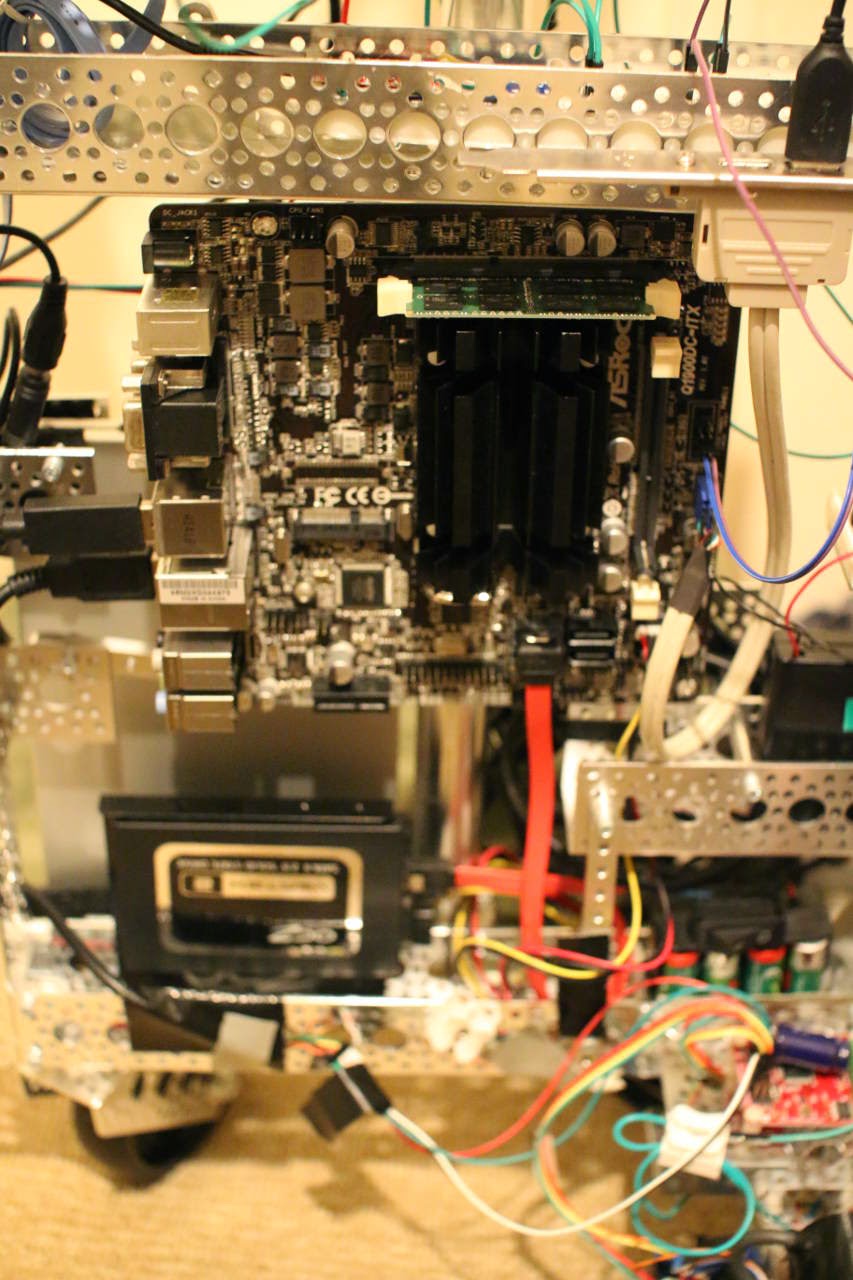 The web interface has been resurrected and extended from the old BBB driven Terry. This is the same Bootstrap/jQuery style interface but now using roslibjs to communicate from the browser to Terry. I'm using WebSockets to talk back, which is what I was doing manually from the BBB, but with ROS that is an implementation choice that gets hidden away and you again get a nice API to talk ROS like things such as publishing and subscribing standard and custom messages. 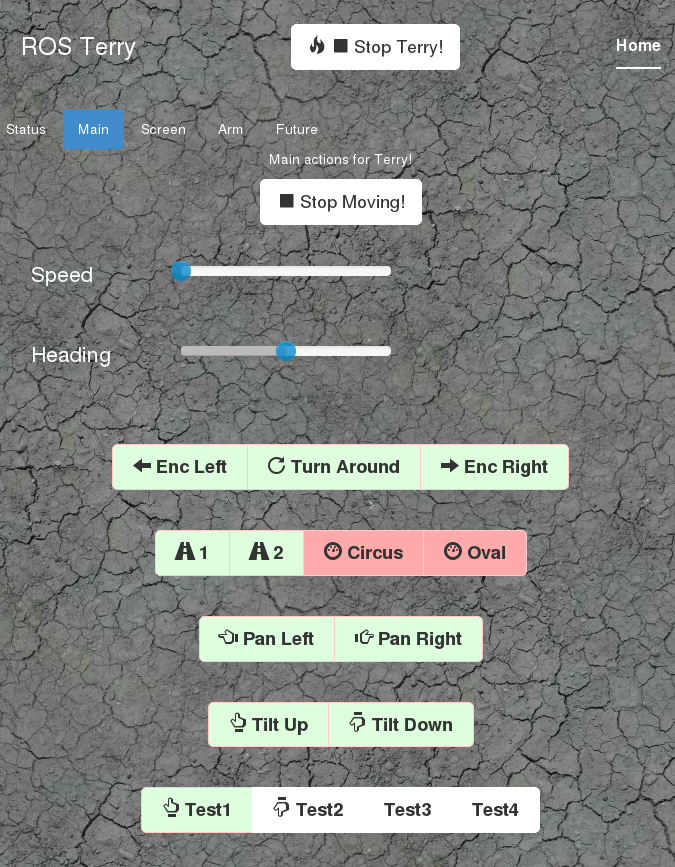 The below javascript code sends an array of 4 floats back to Terry to tell it where you want to have the arm (x,y,z,claw) to be located. The 4th number allows you to open and close the claw in the same command. The wrist is held horizontal to the ground for you. Notice that this message is declared to be a Float32MultiArray which is a standard message type.The msg and topic can be reused, so an update is just a prod to an array and a publish call. You can fairly easily publish these messages from the command line too for brute force testing.

The learning curve is a bit sharp for some parts of ROS. Navigation requires many subsystems to be brought up, and at first I had a case that the robot model was visualized 90 degrees out of phase to reality. Most of the stuff is already there, but you need to have a robot base controller that is compatible. It is also a trap for the new players not to have a simple robot model urdf file. Without a model some parts of the system didn't work for me. I'd have liked to have won with the MoveIt control, and will get back to trying to do just that in the future. I think I'll dig around for shoe string examples, something like building a very basic three servo arm with ice cream sticks and $5 servos would make for an excellent example of MoveIt for hobby ROS folk. Who knows, maybe that example will appear here in a future post.

Posted by monkeyiq at 4:58 AM No comments:

One Small Step for Terry, one giant leap for robotkind.

This evening the BeagleBone Black was finally unbolted from Terry. All the sensors, servos, gearmotors, PWM partial update moosed down RGB DMD screens are controlled from ROS now.

In the process I replaced the physical pan subsystem with a torque multiplied 6 rpm gearmotor. Its 80-24 multiplication giving 1.8 effective rpm at the pan. Unlike the previous setup, the torque is now so high that you can not manually turn the pan system. It occurred to me that this is also a minor hazard as if you get a finger in the gear mesh it would not lead to a "nice place". This is also now using a hollow 1/2 inch metal tube, so I can add a slip ring to allow the pan and tilt to rotate freely at will. I can also much more easily include an IC based pot to close the pan feedback loop with high precision.

It has been interesting going from a board with so many headers for SPI, I2C, UART and GPIO to a general purpose small desktop motherboard running the show. The upside is that things like SLAM and localization which would be tedious to reimplement myself are now available. It might be fun to play with Monte Carlo localization on an mbed based MCU (target point at around 100Mhz/100kb sram). But that's for another day.

The next trick is bringing together the launch files for each subsystem into a Terry-Main.launch that brings it all up.

Posted by monkeyiq at 6:40 AM No comments: