While learning Fusion 360 I thought it would be fun to flex my new knowledge of cutting out curved shapes from alloy. Some donated LED fake candles were all the inspiration needed to design and cut out a candelabra. Yes, it is industrial looking. With vcarve and ball ends I could try to make it more baroque looking, but then that would require more artistic ability than a poor old progammer might have. 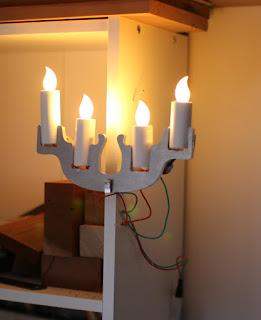 It is interesting working out how to fixture the cut for such creations. As of now, Fusion360 will allow you to put tabs on curved surfaces, but you don't get to manually place them in that case. So its a bit of fun getting things where you want them by adjusting other parameters.

Also I have noticed some issues with tabs on curves where exact multiples of layer depth align perfectly with the top of the tab height. Making sure that case doesn't happen makes sure the resulting undesired cuts don't happen. So as usual I managed to learn a bunch of stuff while making something that wasn't in my normal comfort zone.

The four candles are run of a small buck converter and wired in parallel at 3 volts to simulate the batteries they normall run of.

I can feel a gnarled brass candle base coming at some stage to help mitigate the floating candle look. Adding some melted real wax has also been suggested to give a more real look.

Posted by monkeyiq at 1:03 AM No comments: