The new Arduino 1.6.x IDE makes it fairly simple to use the ESP8266 modules. I have been meaning to play around with a some open window detectors for a while now. I notice two dedicated GPIO pins on the ESP8266, which is one more than I really need. So I threw in an led which turns on when the window is open. Nothing like local, direct feedback that the device has detected the state of affairs. The reed switch is attached on an interrupt so as soon as the magnet gets too far away the light shines. 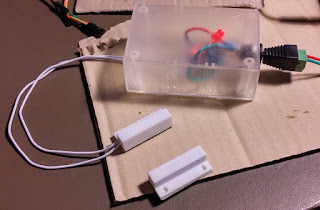 I will probably fold and make the interrupt set a flag so that the main loop can perform an http GET to tell the server as soon as it knows when a state has changed.

Probably the main annoying thing I've still got is that during boot it seems the state of both the gpio pins matters. So if the reed switch is closed when you first spply power then the esp goes into some stall state.

It will be interesting to see how easy OTA firmware updates are for the device.

Posted by monkeyiq at 5:41 AM No comments:

Terry & the start of a video project.

I did a test video showing various parts of Terry the Robot while it was all switched off and talking about each bit as I moved around. Below are some videos of the robot with batteries a humming and a little movement. First up is a fairly dark room and a display of what things look like just using the lighting from the robot itself. All the blinking arduino LEDs, the panel, and the various EL and other lights.

The next video has a room light on and demonstrates some of the control of the robot and screen feedback.

I got some USB speakers too, but they turned out to be a tad too large to mount onto Terry. So I'll get some smaller ones and then Terry can talk to me letting me know what is on its, err, "mind". I guess as autonomy is ramped up it will be useful to know if Terry is planning to navigate around or has noticed that it has been marooned by a chair that a pesky human has moved.

The talk over video is below. I missed talking about the TPLink wifi APs and why there are two, and might be only one in the future. The short answer is that Terry might become a two part robot, with a base station only one wifi AP is needed on the robot itself.

Posted by monkeyiq at 5:27 AM No comments: