Over time the old Terry robot had evolved from a basic "T" shape to have pan and tilt and a robot arm on board. The rear caster(s) were the weakest part of the robot enabling the whole thing to rock around more than it should. I now have Terry 2020 on the cards. 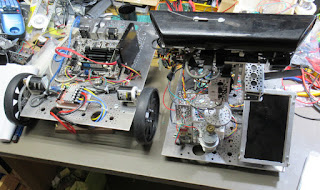 Part of this is an upgrade to a Kinect2 for navigation. The power requirements of that (12v/3a or so) have lead me to putting a better dc-dc bus on board and some relays to be able to pragmatically shut down and bring up features are needed and conserve power otherwise. The new base footprint is 300x400mm though the drive wheels stick out the side.

The wheels out the sides is partially due to the planetary gear motors (on the under side) being quite long. If it is an issue I can recut the lowest layer alloy and move them inward but I an not really needing to have the absolute minimal turning circle. If that were the case I would move the drive wheels to the middle of the chassis so it could turn on it's center.

There will be 4 layers at the moment and a mezzanine below the arm. So there will be expansion room included in the build :)

The rebuild will allow Terry to move at top speed when self driving. Terry will never move at the speed of an outdoor robot but can move closer to it's potential when it rolls again.

Posted by monkeyiq at 7:54 PM No comments: