17 Segments are the new Red.

While 7 Segment displays are quite common, the slightly more complex cousin the 17 segment display allows you to show the A-Z range from English and also some additional symbols due to the extra segments. 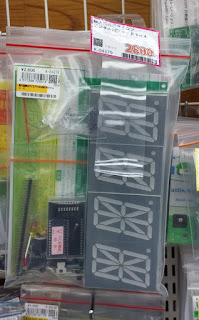 The unfortunate part of the above kit which I got from Akizukidenshi is that the panel behind the 17 segger effectively treats the display as a 7 segger. So you get some large 7 segment digits but can never display an "A" for example. Although this suits the clock that the kit builds just fine, there is no way I could abide wasting such a nice display by not being able to display text. With the esp8266 and other wifethernet solutions around at a low price point it is handy to be able to display the wind speed, target "feels like" temperature etc as well as just the time.

With that in mind I have 3 of these 17 seggers breadboarded with a two transistor highside and custom lowside using an mxp23017 pin muxer driving two 2803 current sinks which are attached using 8 up 330 ohm resistors in IC blocks. This lowside is very useful because with a little care it can be setup on a compact piece of stripboard. All the controlling MCU needs is I2C and it can switch all the cathodes just fine.

While experimenting I found some nice highside driver ICs. I now have custom PCB on their way which can each drive 2 displays and can chain left and right to allow an arbitrary number of displays to be connected into a single line display. More info an photos to follow, I just noticed that I hadn't blogged in a while so thought I'd drop this terse post up knowing that more pictures and video are to come. I also have the digits changing through a fade effect. It is much less distracting to go from time to temp and back if you don't jump the digits in one go.

Posted by monkeyiq at 3:42 AM No comments: