OSX Bundling Soprano and other joys

Libferris has been moving to use more Qt/KDE technologies over the years. Ferris is also a fairly substantial software project in it's own right, with many plugins and support for multiple libraries. Years back I moved from using raw redland to using soprano for RDF handling in libferris.

Over recent months, from time to time, I've been working on an OSX bundle for libferris. The idea is to make installation as simple as copying Ferris.app to /Applications. I've done some OSX packaging before, so I've been exposed to the whole library paths inside dylib stuff, and also the freedesktop specs expecting things in /etc or whatever and you really want it to look into /Applications/YouApp/Contents/Resources/.../etc/whatever.

The silver test for packaging is to rename the area that is used to build the source to something unexpected and see if you can still run the tools. The Gold test is obviously to install from the app.dmz onto a fresh machine and see that it runs.

I discovered a few gotchas during silver testing and soprano usage. If you get things half right then you can get to a state that allows the application to run but that does not allow a redland RDF model to ever be created. If your application assumes that it can always create an in memory RDF store, a fairly secure bet really, then bad things will befall the app bundle on osx.

Plugins are found by searching for the desktop files first and then loading the shared libary plugin as needed. The desktop files can be found with the first line below, while the second line allows the plugin shared libraries to be found and loaded.

You have to jump through a few more hoops. You'll find that the plugin ./lib/soprano/libsoprano_redlandbackend.so links to lib/librdf.0.dylib and librdf will link to other redland libraries which themselves link to things like libxml2 which you might not have bundled yet.

There are also many cases of things linking to QtCore and other Qt libraries. These links are normally to nested paths like Library/Frameworks/QtCore.framework/Versions/4/QtCore which will not pass the silver test. Actually, links inside dylibs like that tend to cause the show to segv and you are left to work out where and why that happened. My roll by hand solution is to create softlinks to these libraries like QtCore in the .../lib directory and then resolve the dylib links to these softlinks.

In the end I'd also like to make an app bundle for specific KDE apps. Just being able to install okular by drag and drop would be very handy. It is my preferred reader for PDF files and having a binary that doesn't depend on a build environment (homebrew or macports) makes it simpler to ensure I can always have okular even when using an osx machine.

Posted by monkeyiq at 6:01 AM No comments:

After getting headlights Terry now has a lighted arm. This is using the 3 meter EL wire and a 2xAA battery inverter to drive it. The around $20 entry point to bling is fairly hard to resist. The EL tape looks better IMHO but seems to be a little harder to work with from what I've read about cutting the tape and resoldering / reconnecting. 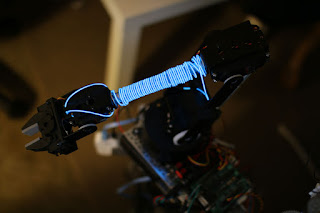 I have a 1 meter red EL tape which I think I'll try to wrap around the pan/tilt assembly. From an initial test it can make it around the actobotics channel length I'm using around twice. I'll probably print some mounts for it so that the tape doesn't have to try to make right angle turns at the ends of the channel.

Terry the robot now has headlights! While the Kinect should be happy in low light I found some nice 3 watt LEDs on sale and so headlights had to happen. The lights want a constant current source of 700mA so I grabbed an all in one chip solution do to that and mounted the lights in series. Yes, there are a load of tutorials on building a constant current driver for a few bucks around the net, but sometimes I don't really want to dive in and build every part. I think it will be interesting at some stage to test some of the constant current setups and see the ripple and various metrics of the different designs. That part of he analysis is harder to find around the place. 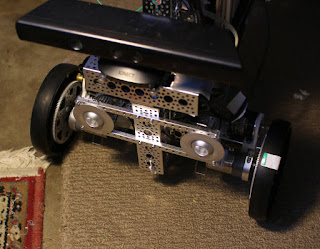 And just how does this all look when the juice is flowing I hear you ask. I have tilted the lights ever so slightly downwards to save the eyes from the full blast. Needless to say, you will be able to see Terry coming now, and it will surely see you in full colour 1080 glory as you become in the sights. I thought about mounting the lights on the pan and tilt head unit, but I really don't want these to ever get to angles that are looking right into a person's eyes as they are rather bright.

On another note, I now have some EL wire and EL tape for Terry itself. So the robot will be glowing in a sublte way itself. The EL tape is much cooler looking than the wire IMHO but the tape is harder to cut (read I probably won't be doing that). I think the 1m of tape will end up wrapped around the platform on the pan and tilt board.

Behind the LED is quite a heatsink, so they shouldn't pop for quite some time. In the top right you can just see the heatshrink direct connected wires on the LED driver chip and the white wire mounts above it. I have also trimmed down the quad encoder wires and generally cleaned up that area of the robot. 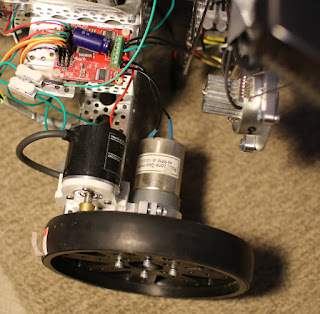 A little while ago I moved the pan mechanism off axle. The new axle is hollow and setup to accomodate a slip ring at the base. I now have said slip ring and am printing a crossover plate for that to mount to channel. Probably by the next post Terry will be able to continuiously rotate the panner without tangling anything up. The torque multiplier of the brass to alloy wheels together with the 6 rpm gearmotor having very high torque means that the panner will tend to stay where it is. Without powering the motor the panner is nearly impossible to move, the grub screws will fail before the motor gives way. 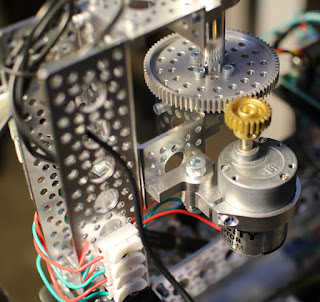 Although the EL tape is tempting, the wise move is to fit the slip ring first.

Posted by monkeyiq at 7:39 PM No comments: