The Sparkfun vs1063 breakout gives you a vs1063 chip with a little bit of supporting circuit. You have to bring your own microcontroller, sdcard or data source, and level shifting. 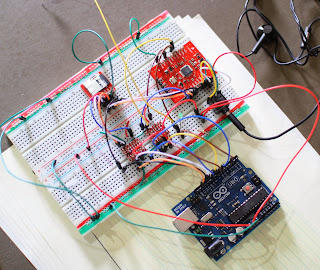 One thing which to my limited knowledge seems unfortunate is that the VCC on the breakout has to be 5v. There are voltage regulators on the vs1063 breakout which give it 3.3v, 2.8v and 1.8v. Since all vregs are connected to VCC and it wants to make its own 3v3 then I think you have to give 5v as VCC on the breakout board.

With the microsd needing to run on 3.3v I downshifted the outbound SPI ports, the sdcard chip select, and the few input pins to the vs1063 board. Those are the two little red boards on the breadboard. The sdcard is simply on a breakout which does no level shifting itself. The MISO pin is good to go without shifting because a 3.3v will trip as high on a 5v line. Likewise the interrupt pin DREQ which goes to pin 2 on the Uno doesn't have any upshifting.

I had a few issues getting the XDCS, XCS, and DREQ to all play well from the microcontroller. A quick and nasty hack was to attach that green LED in the middle of the photo to the interrupt line so I could see when it was tripped. During playback it gives a PWM effect as 32byte blocks of data are shuffled to the vs1063 as it keeps playing. The DREQ is fired when the vs1063 can take at least another 32 bytes of data from the SPI bus to it's internal buffer. Handy to have the arduino doing other things and also servicing that interrupt as needed.

I'm hoping to use a head to tail 3v3 design for making a mobile version of the circuit. I would have loved to use 2xAA batteries, but might have to go another way for power. Unfortunately the OLED screen I have is 5v but there are 3v3 onces of those floating around so I can get a nice modern low power display on there.

The next step is likely to prototype UI control for this. Which I'll probably use the 5v OLED in the meantime to get a feel for how things will work. I get the feeling that an attiny might sit between the main arduino and the parallel OLED screen so it can be addressed on the SPI bus too. Hmm, attiny going into major power save mode until chip selected back into life.

Posted by monkeyiq at 7:08 PM No comments:

A little while back I bought a rePaper 2.7 inch eInk display. While the smaller, down to 1.4 inch screens have few enough pixels to be driven from an Arduino, the 264x176 screen should need around 5.5k for a single frame buffer, and you need two buffers to "wax on, wax off" the image on the display in order to update. The short story is that these displays work nicely from the BeagleBone Black. You have to have a fairly recent kernel in order to get the right sys files for the driver. Hint: if you have no "duty" file for your pwm then you have too old of a kernel.

So the first image I chose to display after the epd_test was a capture of fontforge editing Cantarell Regular. Luckily, I've made no changes to the splineset so my design skills are not part of the image. The rendering of splines in the charview of fontforge uses antialiasing, as it was switched over to cairo around a year ago. As the eInk display is monochrome the image displayed is dithered back to 1 bit. 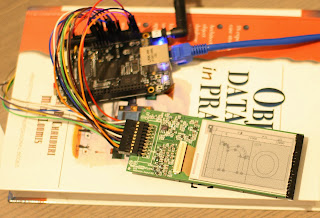 With the real time collaboration support in fontforge this does raise the new chance to see a font being rendered on eInk as you design it (or hint it). I'm not sure how many fonts are being designed with eInk as the specific consumption ground. If you are interested in font design, checkout Crafting Type which uses fontforge to create new type, and you should also be able to see the collaboration and HTML preview modes in action.

Getting the actual eInk display to go from the BeagleBone had a few steps. Firstly, I managed to completely fill up the 2gb of eMMC where my Angstrom was installed. So now I'm running the whole show off a high speed 8gb sandisk card. I spent a little extra cash on a faster card, its one of the extreme super panda + extra adjective sandisk ones. The older kernel I had didn't have a duty file for the PWM pin that the driver wanted to use. Now I that I have a fully updated beaglebone black boot area I have that file. FWIW I'm on kernel version 3.8.13-r23a.49.

Trying out the epd_test initially showed me some broken lines and after a little bit what looked like a bit of the cat from the test image. After rechecking the wireup a few times I looked at the code and saw it was expecting a 2 inch screen. That happens in a few places in the code. So I changed those to reflect my hardware. Then the test loop ran as expected!

The next step was getting the FUSE driver installed (change for size needed too). Then the python demos could run. And thus the photo above was made. My next step is to create a function to render cairo to /dev/epd/display in order to drive the display directly from a cairo app.

A huge thank you to rePaper for making this so simple to get going. The drivers for Raspberry and Beagle are up on their github page. I had been looking at the Arduino driver and it's SPI code thinking about porting that over to Linux, but now that's not necessary! I might design some cape love for this, perhaps with a 14 pin IDC connector on it for eInk attaching. Shouldn't look much worse than last night's SPI only monster, though something etched would be nicer. 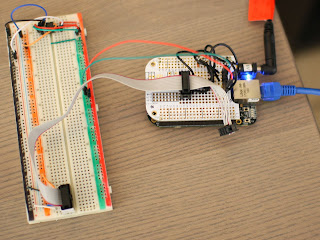 The 2.7 inch changes are below, the first one is just slightly more verbose error reporting. You'll also want to set EPD_SIZE=2.7 in /etc/init.d/epd-fuse.