The reprap is designed to be able to "self replicate" to a degree. If a part on a reprap 3d printer breaks then a replacement part can be printed and attached. Parts can evolve as new ideas come along. Having parts crack or weaken on a 3d printer can be undesirable though.

A part on this printer was a mix of acrylic and PLA, both of which were cracked. Not quite what one would hope for as a foot of the y-axis. It is an interesting design with the two driving rods the same length as the alloy channel at the back of the printer. 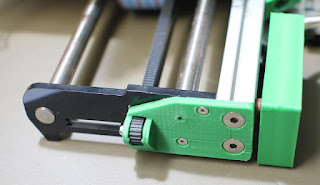 A design I thought of called for 1/2 inch alloy in order to wrap the existing alloy extrusion with a 3mm cover. The dog bone on the slot is manually added in Fusion 360 so it is larger than needed. The whole thing being a learning exercise for me as to how to create 2.5D parts. The belt tensioning is on a 6mm subassembly that is mounted on the bracket in the right of the image below. 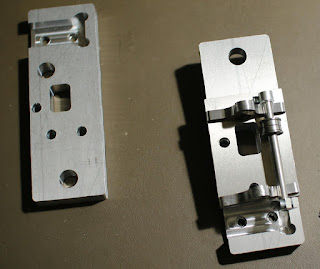 The bracket and subassembly are shown mounted below. Yes, using four M6 bolts to tension a belt is overkill. I would imagine you can stretch the belt to breaking point quite easily with these bolts. The two rods are locked into place using M3 tapped grub screws. The end brackets are bolted to the back extrusion using two M6 bolts. 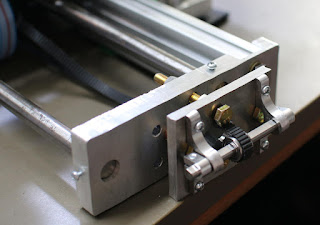 The z-axis is now supported by a second 10mm alloy custom bracket. This combination makes it much, much harder to wobble the z-axis than the original design using plastic parts. 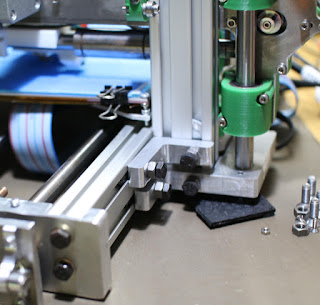