I recently upgraded a 3040 CNC machine by replacing the parallel port driven driver board with a smoothieboard. This runs a 100Mhz Cortex-M mcu and has USB and ethernet interfaces, much more modern. This all lead me to coming up with a new controller to move the cutting head, all without needing to update the controller box or recompile or touch the smoothieboard firmware. 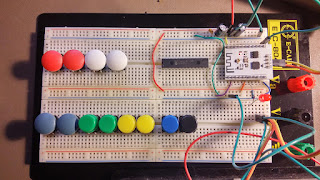 I built a small controller box with 12 buttons on it and shoved an esp8266 into that box with a MCP23017 chip to allow access to 16 gpio over TWI from the esp mcu. The firmware is fairly simple on the esp, it enables the internal pull ups on all gpio pins on the 23017 chip and sends an MQTT message when each button is pressed and released. The time since MCU boot in milliseconds is sent as the MQTT payload. This way, one can work out if this is a short or longer button press and move the cutting head a proportional distance.

The web interface for smoothie provides a pronterface like interface for manipulating where the cutting head is on the board and the height it is at. So lucky that it's open source firmware so I can see the non obfuscated javascript that the web interface uses. Then work out the correct POST method to send gcode commands directly to the smoothieboard on the CNC.

The interesting design here is using software on the server to make the controller box meet the smoothieboard. On the server MQTT messages are turned into POST requests using mqtt-launcher. The massive benefit here is that I can change what each button does on the CNC without needing to reprogram the controller or modify the cnc firmware. Just change the mqtt-launcher config file and all is well. So far MQTT is the best "IoT" tech I've had the privilege to use. 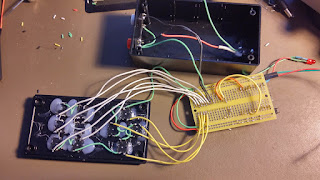 I'll probably build another controller for controlling 3d printers. Although most 3d printers just home each axis there is sometimes some pesky commands that must be run at startup, to help home z-axis for example. Having physical buttons to move the x axis down by 4mm, 1mm and 0.1mm makes it so much less likely to fat finger the web interface and accidentally crash the bed by initiating a larger z-axis movement than one had hoped for.

Posted by monkeyiq at 2:22 AM No comments: