I initially thought that removing the multiple week wait for a board would be the true joy of making PCBs locally. It turns out that quick iteration is the best part. Version 2 and 3 of a board flows quickly and you end up with something unexpected after only a few days of tinkering.

I'm still at the level of making through hole stuff. Hopefully I can refine the process to allow some of the larger SMT stuff too. Throwing some caps, leds, resistors, dc jacks, and regulators on for a first cook round will cut down on the soldering phase. 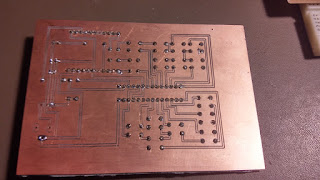 My hello world PCB was an ESP8266 carrier with an mcp23017 muxer and a bunch of buttons. This is an MQTT emission device which I will be using to assist in the controlling of a 3d printer. While web interfaces are flexible, some tend to put buttons too close and you can fairly easily crash the bed by clicking down instead of up in some cases. 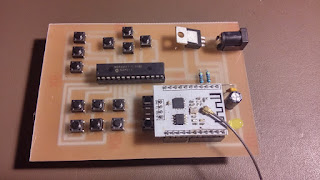 Today's iteration is an esp8266 breadboarder. This allows 3v3 intake, has a TTL serial header (on the left) and a resistor + led combo on pin 14 for blink testing. The button at top right toggles into flashing mode and the bottom of the board breaks out 7 gpios onto the breadboard. The 3v3 and ground also have a header under the hot glue to the power rails on the breadboard. Very handy for testing a breadboard layout before designing the next PCB to have an ESP8266 pressed into it. 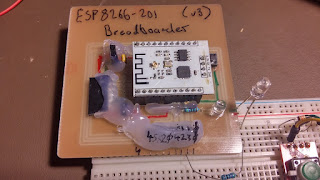 The breadboard side needs a little trimming back. Turns out the older breadboard I used to measure was wider than this one :o

Posted by monkeyiq at 1:58 AM No comments: