What started as a little tinker around the edges has resulted in many parts of Terry being updated. The Intel j1900 motherboard is now mounted in the middle of the largest square structure, and SSD is mounted (the OCZ black drive at the bottom), yet another battery is mounted which is a large external laptop supply, the Kinect is now mounted on the pan and tilt mechanism along with the 1080p webcam that was previously there. The BeagleBone Black is moved to its own piece of channel and a breadboard is sunk into the main 2nd top level channel. 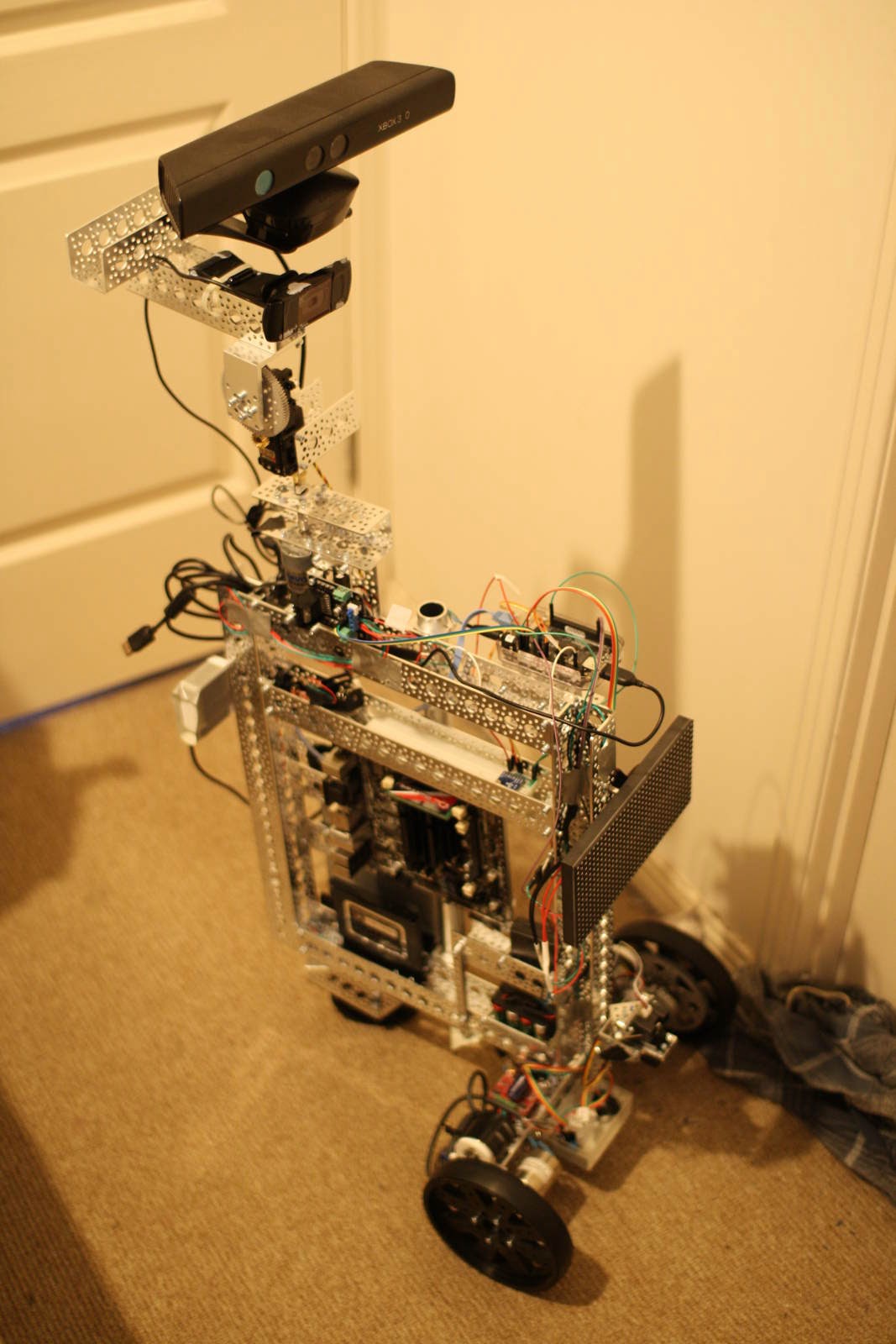 I haven't cabled up the j1900 yet. On the SSD is Ubuntu and ROS including a working DSLAM (strangely some fun and games getting that to compile and then to not segv right away).

I used 3 Actobotics Beams, one IIRC is a 7.7 incher and two shorter ones. The long beam actually lines on for the right side of the motherboard that you see in the image. The beam is attached with nylon bolts and has a 6.6mm standoff between the motherboard and the beam to avoid any undesired electrical shorts. With the two shorter beams on the left side of the motherboard it is rather securely attached to Terry now. The little channel you see on the right side up a little from the bottom is there for the 7.7 inch beam to attach to (behind the motherboard) and there is a shorter beam on this side to secure the floating end of the channel to the base channel. 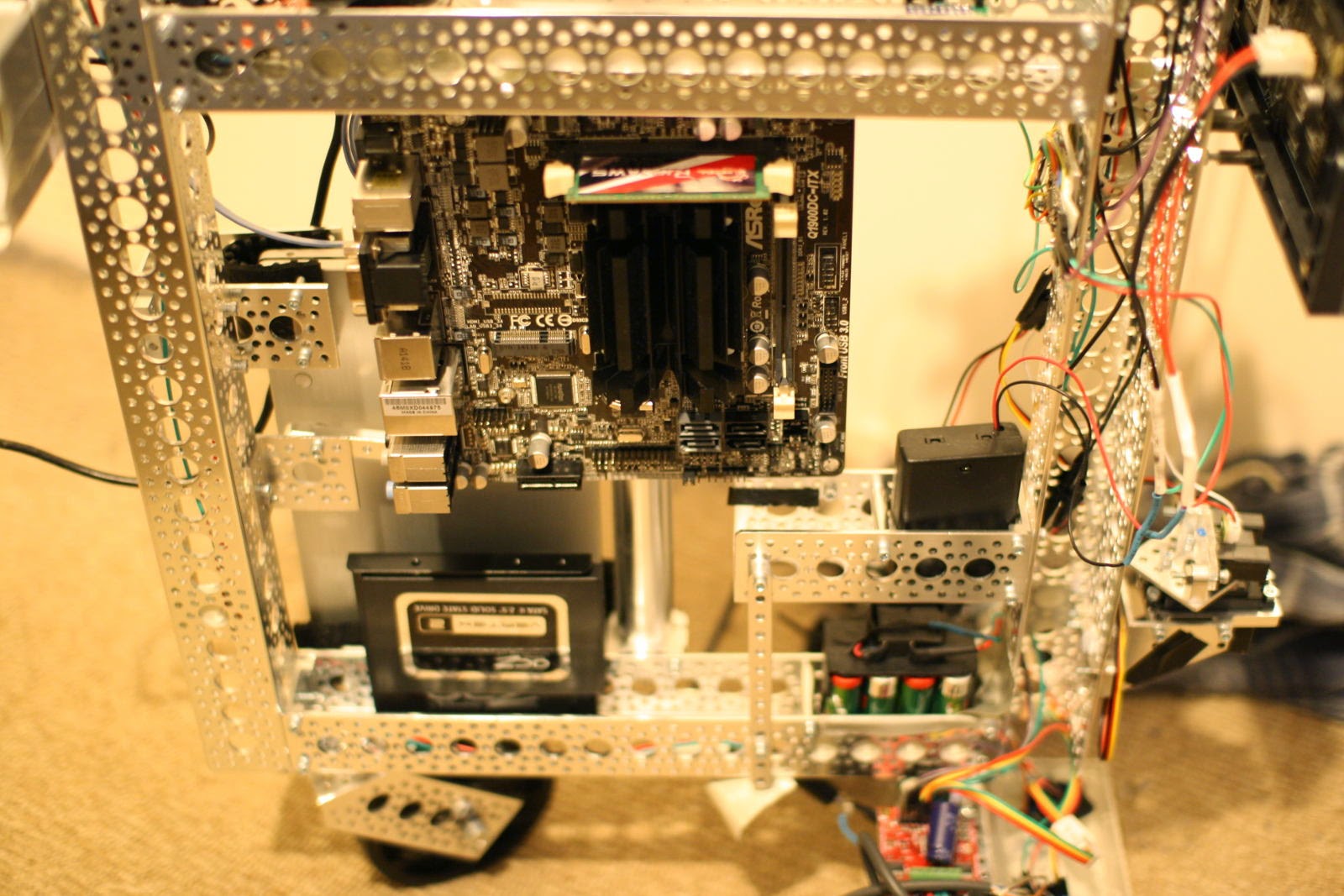 The alloy structure at the top of the pan and tilt now has a Kinect attached. I used a wall mount plastic adaptor which with great luck and convenience the nut traps lined up to the actobotics holes. I have offset the channel like you see so that the center of gravity is closer to directly above the pan and tilt. Perhaps I will have to add some springs to help the tilt servo when it moves the Kinect back too far from the centre point. I am also considering a counter balance weight below the tilt which would also work to try to stabilize the Kinect at the position shown. 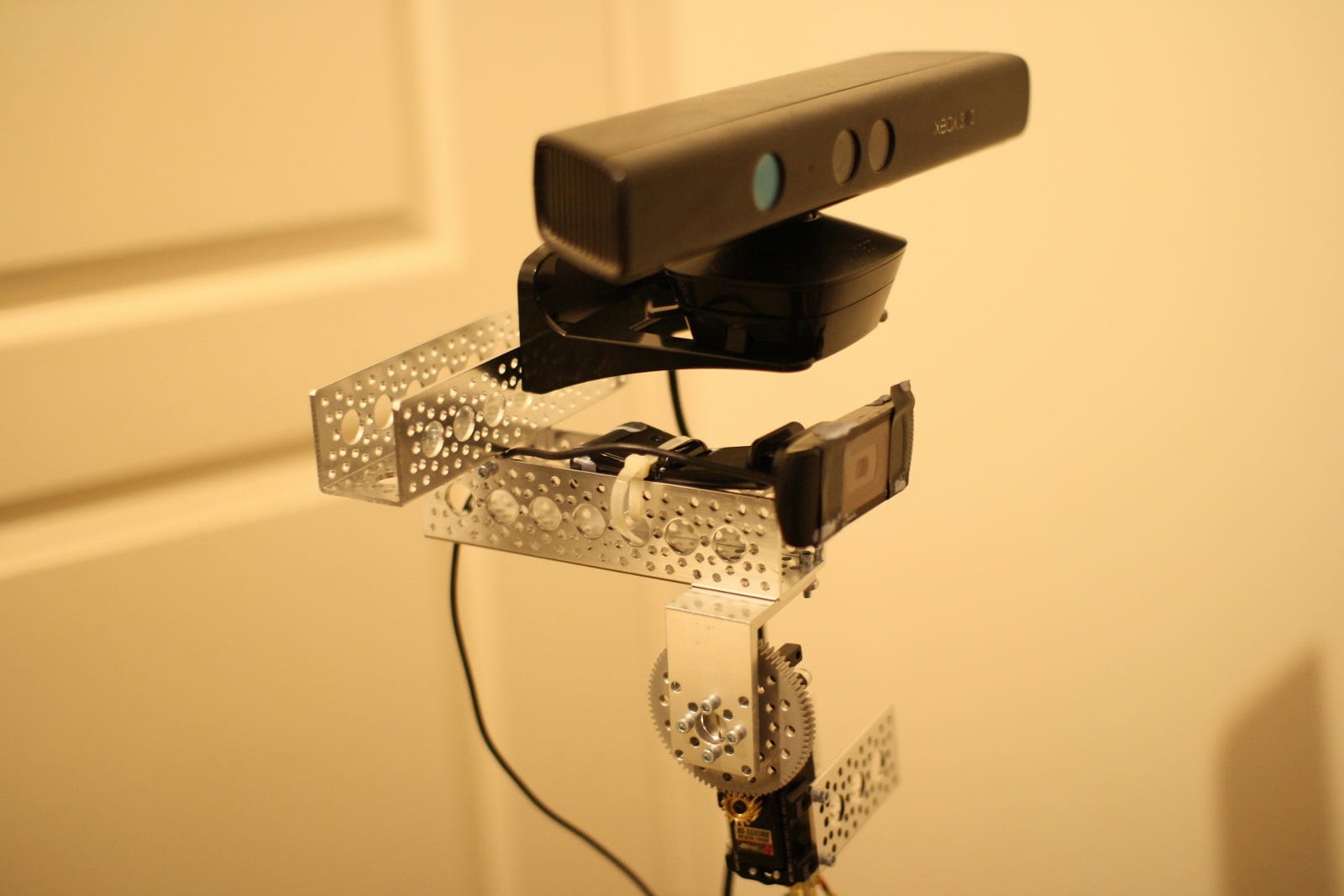 I was originally planning to put some gripper on the front of Terry. But now I'm thinking about using the relatively clean back channel to attach a threaded rod and stepper motor so that the gripper can have access to the ground and also table top. Obviously the cameras would have to rotate 180 degrees to be able to see what the gripper was up to. Also for floor pickups the tilt might have to be able to handle a reasonable downward "look" without being too hard on the servo.

There were also some other tweaks. A 6 volt regulator is now inlined into a servo extension cable and the regulator is itself bolted to some of the channel. Nice cooling, and it means that the other end of that servo extension can take something like 7-15v and it will give the servo the 6v it wants. That is actually using the same battery pack as the drive wheels (8xAA).

One thing that might be handy for others who find this post, the BeagleBone Black Case from sparkfun attaches to Actobotics channel fairly easily. I used two cheesehead m3 nylocks and had to force them into the enclosure. The nylocks lined up to the Actobotics channel and so the attachment was very simple. You'll want a "3 big hole" or more bit of channel to attach the enclosure to. I attached it to a 3 bit holer and then attaced that channel to the top of Terry with a few threaded standoffs. Simplifies attach and remove should that ever be desired.

I know I need slip rings for the two USB cameras up top. And for the tilt servo as well. I can't use a USB hub up top because both the USB devices can fairly well saturate a USB 2.0 bus. I use the hardware encoded mjpeg from the webcam which helps bandwidth, but I'm going to give an entire USB 2.0 bus to the Kinect.

Posted by monkeyiq at 1:27 AM No comments:

The wiring and electronics for the new omniwheel robot are coming together nicely. Having wired this up using 4 individual stepper controllers, one sees the value in commissioning a custom base board for the stepper drivers to plug into. I still have to connect an IMU to the beast, so precision strafing will (hopefully) be obtainable. The sparkfun mecanum video has the more traditional two wheels each side design, but does wobble a bit when strafing.

Apart from the current requirements the new robot is also really heavy, probably heavier than Terry. I'm still working out what battery to use to meet the high current needs of four reasonable steppers on the move.

Posted by monkeyiq at 6:23 AM No comments: