CNC Z Axis with 150mm or more of travel

Many of the hobby priced CNC machines have limited Z Axis movement. This coupled with limited clearance on the gantry force a limited number of options for work fixtures. For example, it is very unlikely that there will be clearance for a vice on the cutting bed of a cheap machine.

I started tinkering around with a Z Axis assembly which offers around 150mm of travel. The assembly also uses bearing blocks that should help overcome the tensions that drilling and cutting can offer. 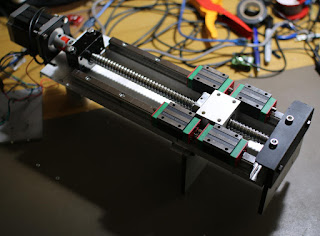 The assembly is designed to be as thin as possible. The spindle mount is a little wider which allows easy bolting onto the spindle mount plate which attaches to these bearings and drive nut. The width of the assembly is important because it will limit the travel in the Y axis if it can interact with the gantry in any way.

Construction is mainly done in 1/4 and 1/2 inch 6061 alloy. The black bracket at the bottom is steel. This seemed like a reasonable choice since that bracket was going to be key to holding the weight and attachment to the gantry.

The Z axis shown above needs to be combined with a gantry height extension when attaching to a hobby CNC to be really effective. Using a longer travel Z axis like this would allow higher gantries which combined allow for easier fixturing and also pave the way for a 4/5th axis to fit under the cutter.

Posted by monkeyiq at 3:56 PM No comments:

Having access to a wood cutting CNC machine that can do a full sheet of plywood at once has led me to an initial project for a large sconce stand. The sconce is 210mm square at the base and the DAR ash I used was 140mm across. This lead to the four edge grain glue ups in the middle of the stand. 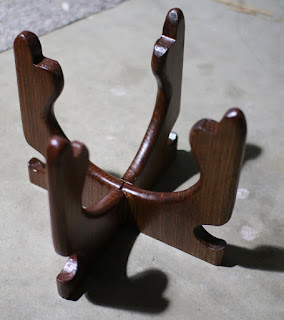 The design was created in Fusion 360 by just seeing what might look good. Unfortunately the sketch export as DXF presented some issues on the import side. This was part of why a littler project like this was a good first choice rather than a more complex whole sheet of ply.

To get around the DXF issue the tip was to select a face of a body and create a sketch from that face. Then export the created sketch as DXF which seemed to work much better. I don't know what I had in the original sketch that I created the body from that the DXF export/import didn't like. Maybe the dimensions, maybe the guide lines, hard to know without a bisect. The CNC was using the EnRoute software, so I had to work out how to bounce things from Fusion over to EnRoute and then get some help to reCAM things on that side and setup tabs et al.

One tip for others would be to use the DAR timber to form a glue up before arriving at a facility with a larger cut surface. Fewer pieces means less tabs/bridges and easier reCAM. A preformed blue panel would also have let me used more advanced designs such as n and u slots to connect two pieces instead of edge grains to connect four.

Overall it was a fun build and the owner of the sconce will love having it slightly off the table top so it can more easily be seen.

Posted by monkeyiq at 5:06 AM No comments: