Sparkfun sell some nice little omniwheels made by FingerTech Robotics. These come with a grub screw mount for a 3mm axle. While it is said around the webs that one might drill out the mount to accept up to a 6mm axle, I wanted a more flexible solution for mounting these wheels onto an Actobotics structure. It turns out that the four screw mounts (using what I think are x-40 screws) are in an extremely close location to the four screws on the Actobotics hub mount. Unfortunately it was a tad hard for me to get a hold of longer x-40 screws to attach the hub mount, so I ended up taking the wheel apart and replacing the standoffs with the Actobotics ones. The result is shown below: 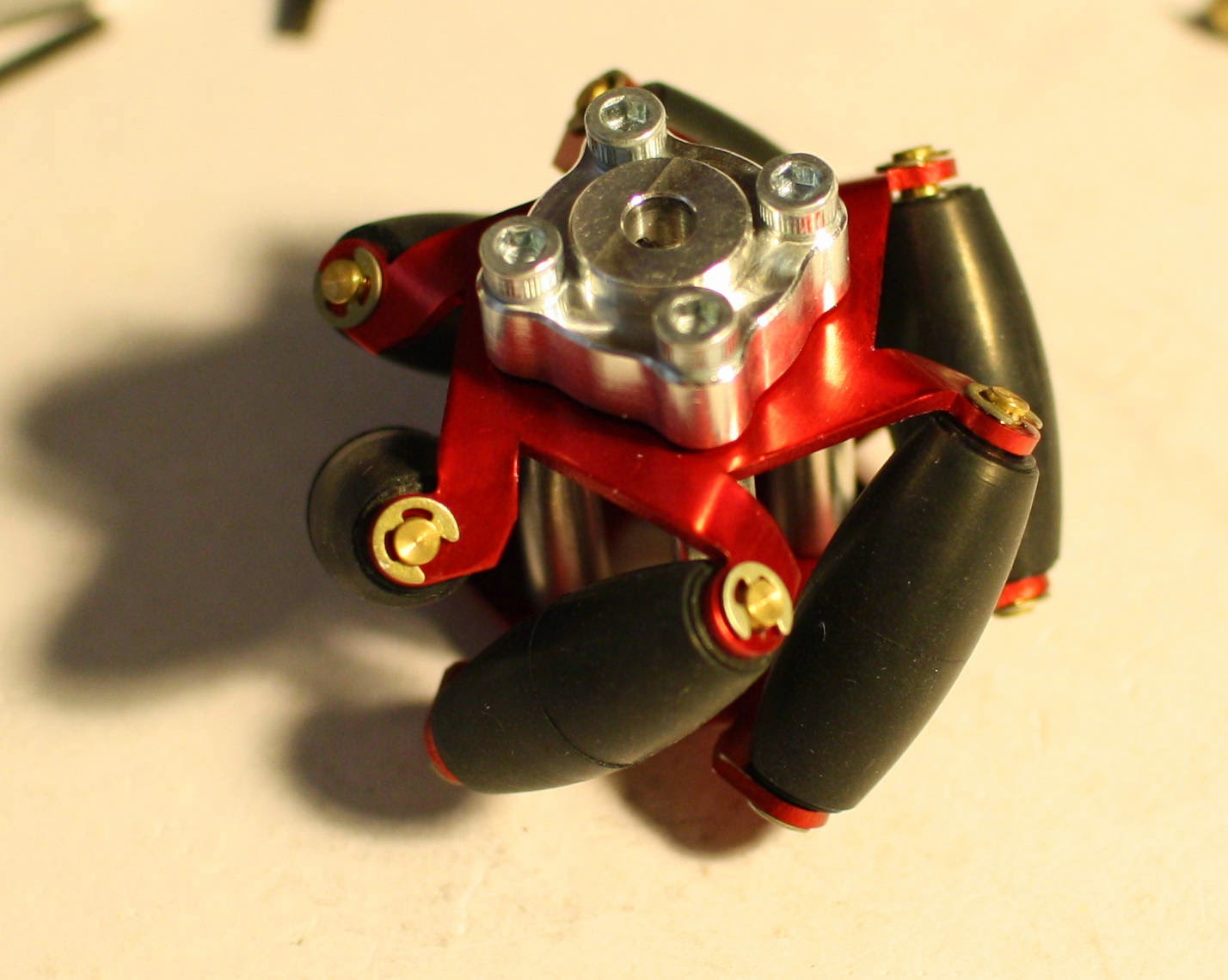 The below shows the mecanum wheel taken apart. The three standoffs you see vertical in the image are the original ones from the wheel. These are about 1 inch long, so you'll be wanting some 1 inch actobotics standoffs to replace them with. When you unscrew the original standoffs then the hub mount part (centre of the red alloy), will be able to fall out and be removed. This lets you screw the Actobotics standoffs on and then on the other side use slightly longer bolts to attach the hub mount to the wheel to get the assembly shown above. 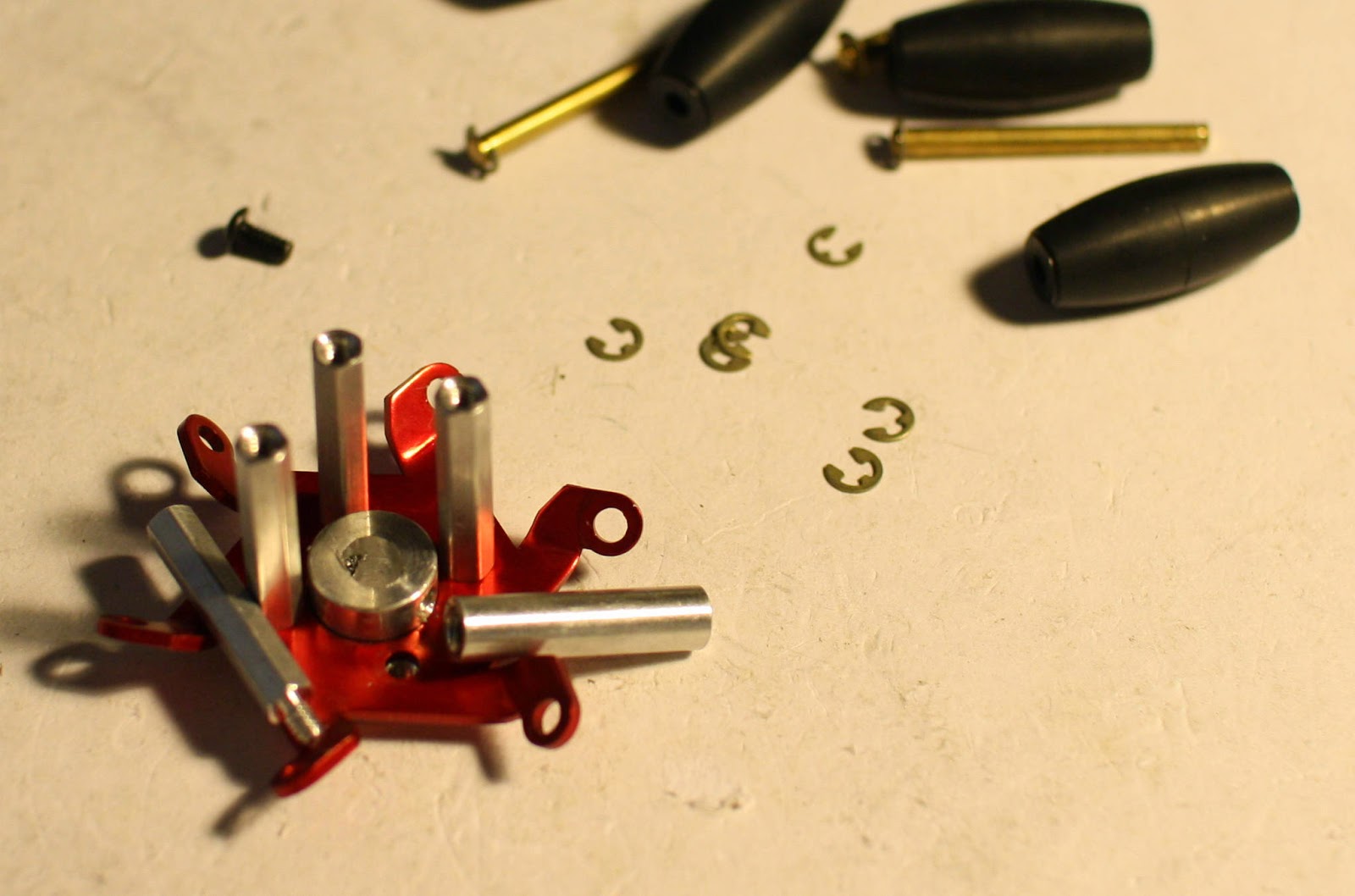 Apart from a clean 6mm hookup for the stepper motors that I plan to use, this is a handy modification allowing the 1/4 inch hub mount or other sizes to be substituted in instead. This is handy if you want to switch from 6mm to 6.35mm (1/4 inch) axles as you can easily change your mind just by changing the actobotics hub mounts.

Posted by monkeyiq at 3:20 PM No comments:

The Kinect is now connected much closer to the tilt axis, giving a much better torque to hold ratio from the servo gearbox. I used some self tapping screws to attach the channel to the bottom of the Kinect. Probably not the cleanest solution but it appears to mount solidly and then you get to bolt that channel to the rest of the assembly. For a closer look the Logitech 1080 webcam is mounted offset from the Kinect. This should give an enjoyable time using the 1080 RGB data and combining the VGA depth mask from the Kinect into a point cloud. 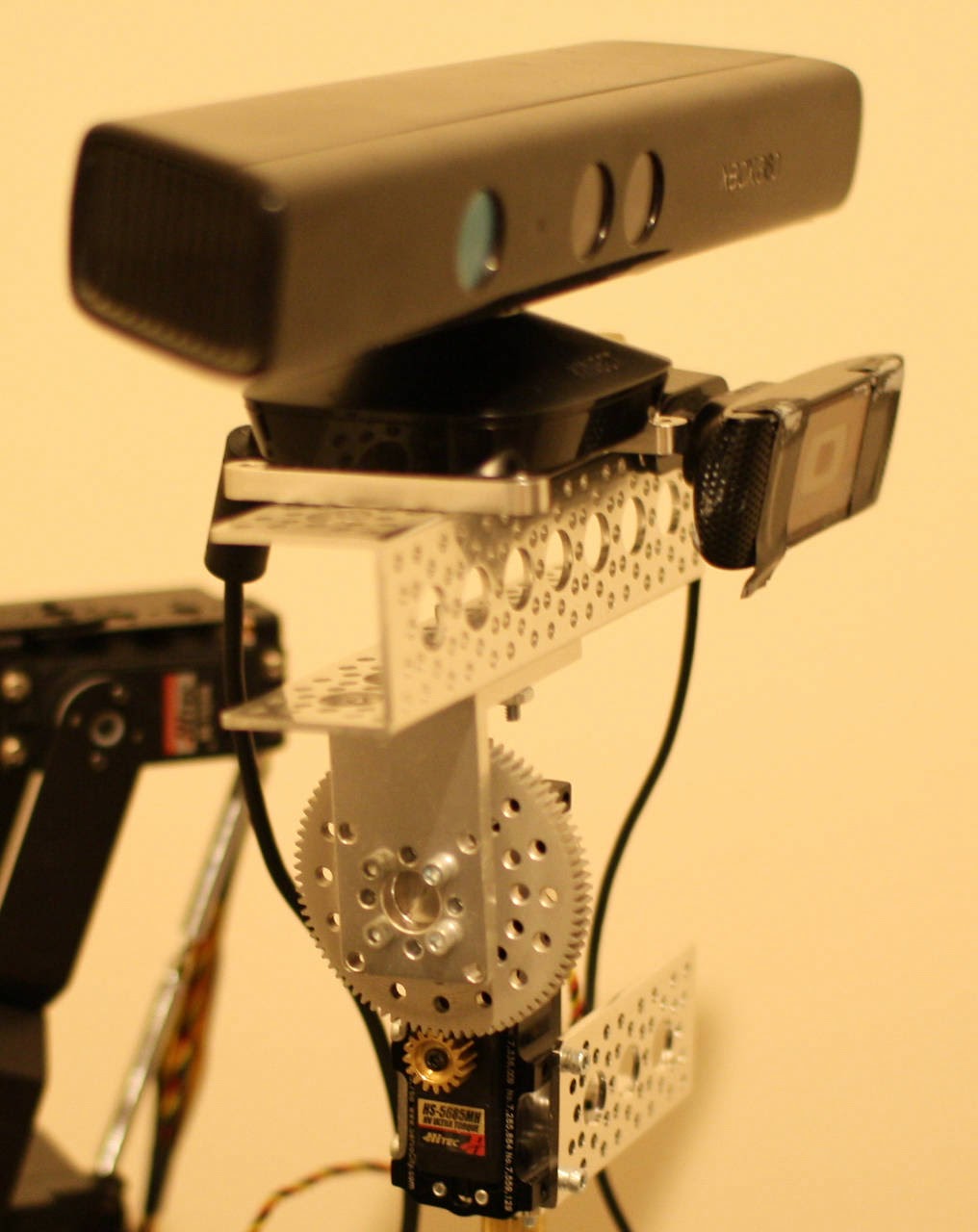 The camera pan/tilt is now at the front of the top shelf and a robot arm is mounted at the back of the shelf. The temptation is high to move the arm onto a platform that is mounted using threaded rod to the back of Terry. All sorts of fun and games to be had with automated "pick up" and move tasks! Also handy for some folks who no longer enjoy having to pick items up from the ground. The camera pan/tilt can rotate around to see first hand what the arm is doing, so to speak. 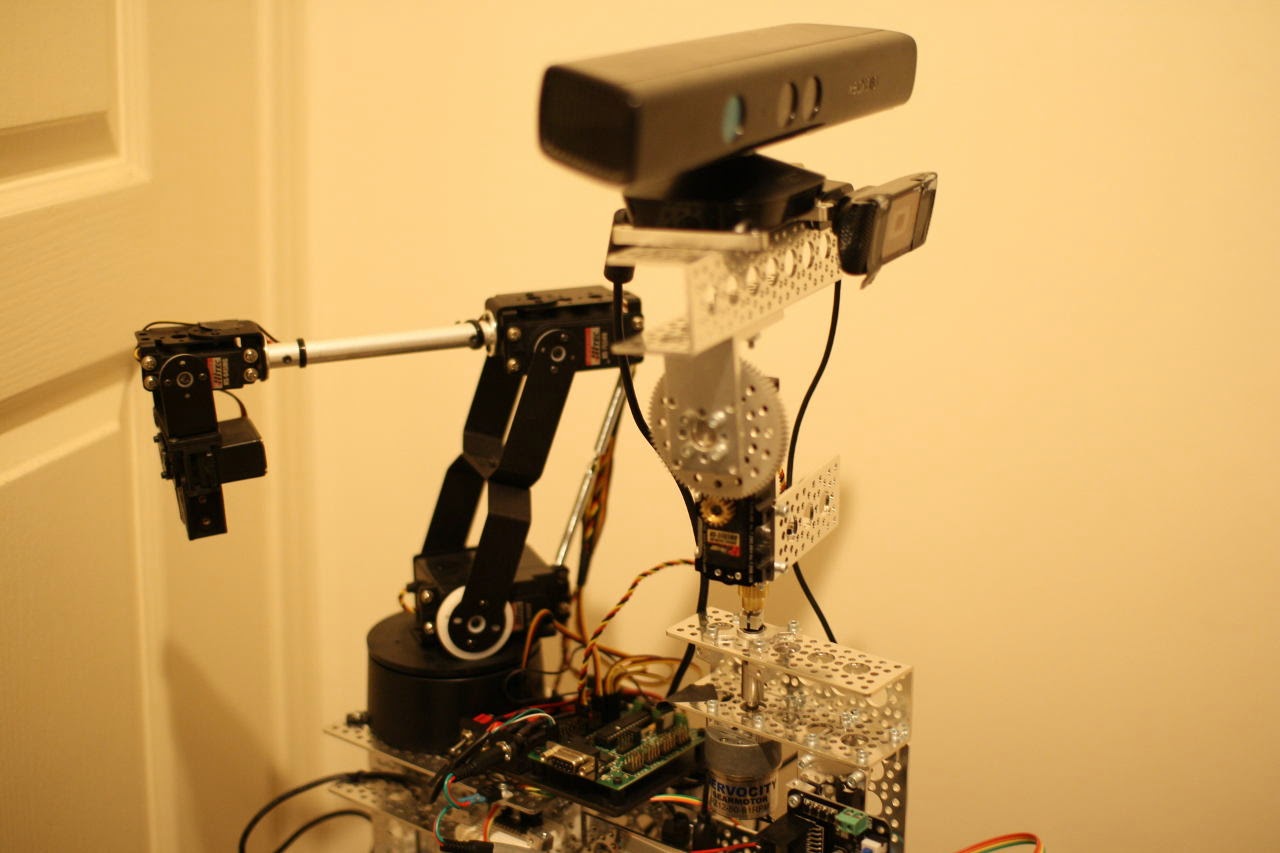 The wheel assembly is one area that I'm fairly happy with. The yumo rotary encoder runs 1024 P/R and it is attached using an 8:1 down ratio to give an effective "ideal world" 13 bit precision. Yes, there are HAL effect ICs that give better precision, though they don't look as cool ;) The shaft of the motor is the axle for the wheel. It is handy that the shaft is not right in the centre of the motor because you can rotate the motor to move the wheel through an arc, and thus adjust the large alloy gear until it nicely mates with the brass gear on the rotary encoder. 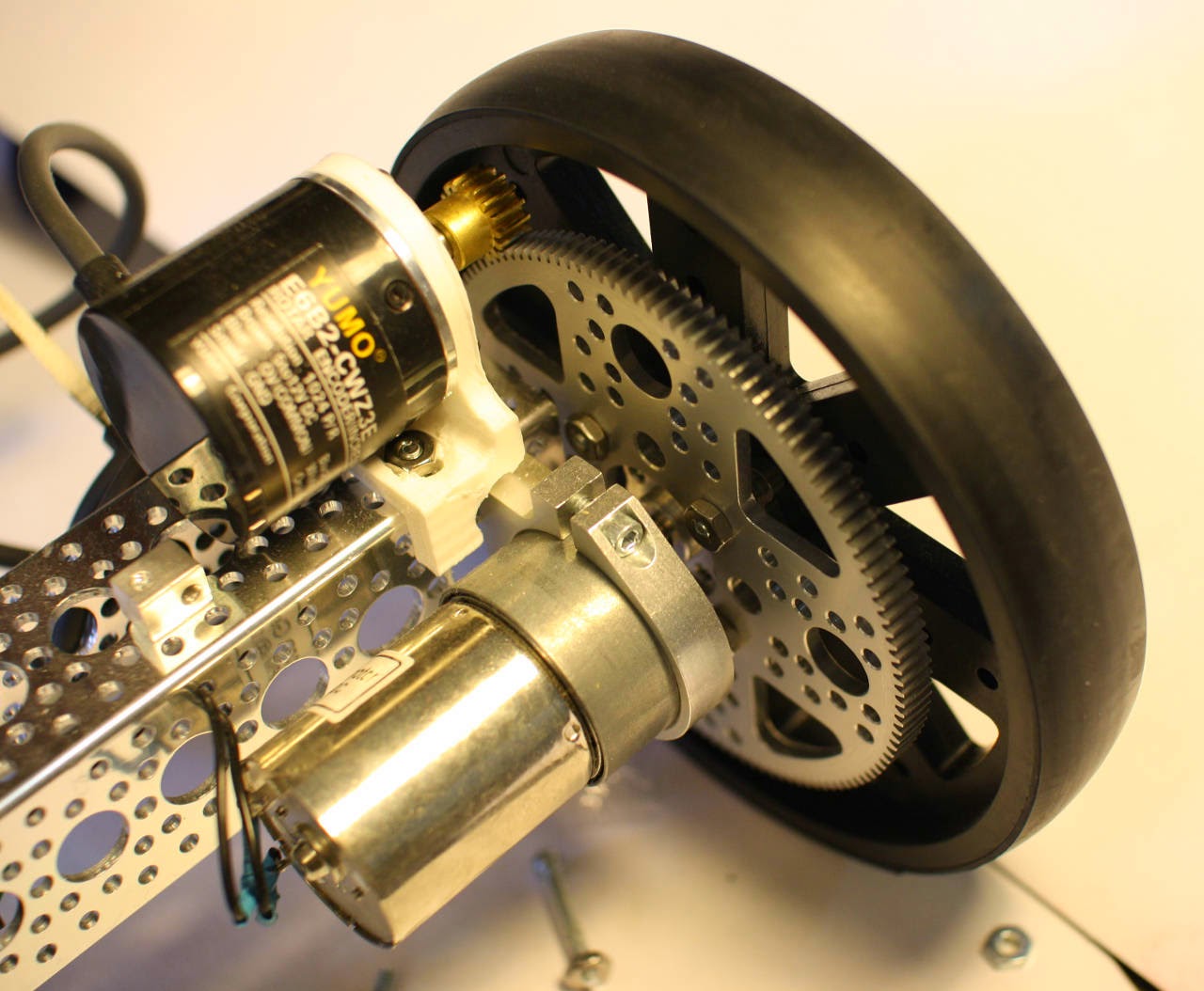 Lower down near the wheels is a second distance sensor which is good for up to around 80cm distance. The scan rate is much slower than the Kinect however. 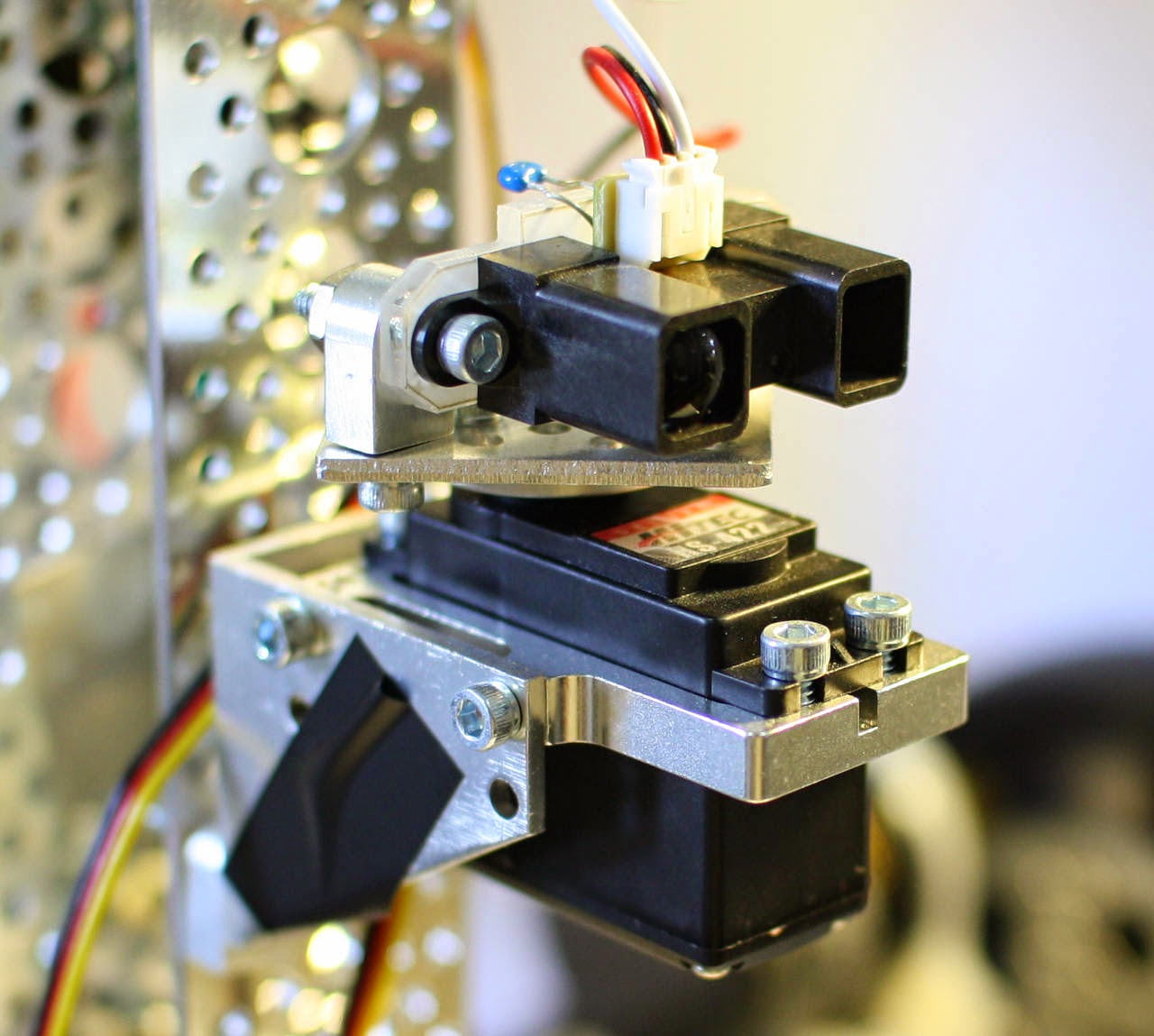 Things are getting very interesting now. A BeagleBone Black, many Atmel 328s on board, and an Intel j1900 motherboard to run the SLAM software.