Terry Motor Upgrade -- no stopping it!

I have now updated the code and PID control for the new RoboClaw and HD Planetary motor configuration. As part of the upgrade I had to move to using a lipo battery because these motors stall at 20 amps. While it is a bad idea to leave it stalled, it's a worse idea to have the battery have issues due to drawing too much current. It's always best to choose where the system will fail rather than letting the cards fall where the may. In this case, leaving it stalled will result in drive train damage in the motors, not a controller board failure, or a lipo issue. 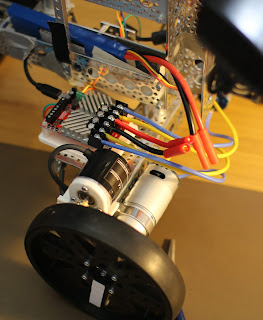 One of the more telling images is below which compares not only the size of the motors but also the size of the wires servicing the power to the motors. I used 14AWG wire with silicon coating for the new motors so that a 20A draw will not cause any issues in the wiring. Printing out new holders for the high precision quadrature encoders took a while. Each print was about 1 hour long and there was always a millimetre or two that could be changed in the design which then spurred another print job.

Below is the old controller board (the 5A roboclaw) with the new controller sitting on the bench in front of Terry (45A controller). I know I only really needed the 30A controller for this job, but when I decided to grab the items the 30A was sold out so I bumped up to the next model. 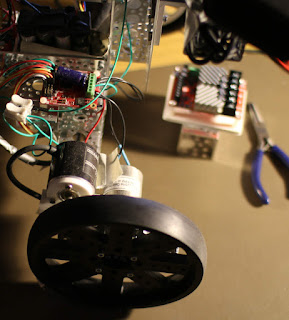 The RoboClaw is isolated from the channel by being attached via nylon bolts to a 3d printed cross over panel.

One of the downsides to the 45A model, which I imagine will fix itself in time, was that the manual didn't seem to be available. The commands are largely the same as for the other models in the series, but I had to work out the connections for the quad encoders and have currently powered them of the BEC because the screw terminal version of the RoboClaw doesn't have +/- terminals for the quads.

One little surprise was that these motors are quite magnetic without power. Nuts and the like want to move in and the motors will attract each other too. Granted it's not like they will attract themselves from any great distance, but it's interesting compared to the lower torque motors I've been using in the past. 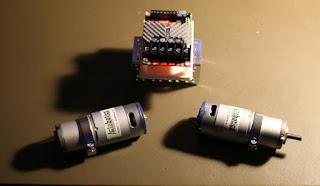 I also had a go at wiring 4mm connectors to 10AWG cable. Almost got it right after a few attempts but the lugs are not 100% fixed into their HXT plastic chassis because of some solder or flux debris I accidentally left on the job. I guess some time soon I'll be wiring my 100A monster automotive switch inline in the 10AWG cable for solid battery isolation when Terry is idle. ServoCity has some nice bundles of 14AWG wire (which are the yellow and blue ones I used to the motors) and I got a bunch of other wire from HobbyKing.

A sad day when your robot outgrows it's baby motors. On carpet this happened when the robot started to tip the scales at over 10kg. So now I have some lovely new motors that can generate almost 10 foot pounds of torque. 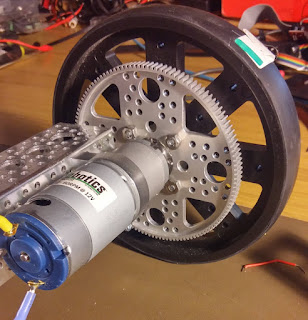 This has caused me to move to a more rigid motor attachment and a subsequent modofication and reprint of the rotary encoder holders (not shown above). The previous motors were spur motors, so I could rotate the motor itself within its mounting bracket to mate the large gear to the encoders. Not so anymore. Apart from looking super cool the larger alloy gear gives me an 8 to 1 reduction to the encoders, nothing like the feeling of picking up 3 bits of extra precision.

This has also meant using some most sizable cables. The yellow and purple cables are 14 AWG silicon wires. For the uplink I have an almost store bought 12AWG and some hand made 10 AWG monsters. Each motor stalls at 20A so there is the potential of a noticable amount of current to flow around the base of Terry now.