I was recently thinking about how I could make a selection of 1/4 inch drive bits easier to use. It seems I am not alone in the crowd of people who leave the bits in the case they came in. Some folks do that for many decades. Apart from being trapped into what "was in the set" this also creates an issue when you have some 1/4 inch parts in a case that includes many more 3/8 inch drive bits. I originally marked the smaller drive parts and though about leaving them in the blow molded case as is the common case.

The CNC fiend in me eventually got the better of me and the below is the result. I cut a prototype in pine first, knowing that the chances of getting it all as I wanted on the first try was not impossible, but not probable either. Version 1 is shown below. 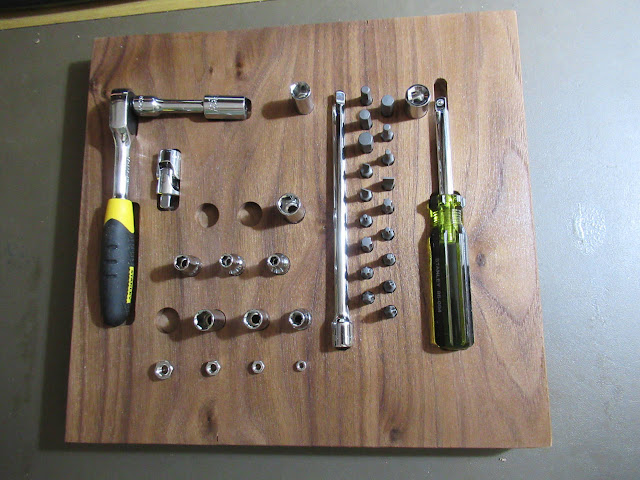 The advantage is that now I have the design in Fusion 360 I can cut this design in about an hour. So if I want to add a bunch of deep sockets to the set I can do that for the time cost mostly of gluing up a panel, fixturing it and a little sand a shellac. Not a trivial en devour but the result I think justifies the means.

Below is the board still fixtured in the cnc machine. I think I will make a jig with some sliding toggle clamps so I can fix panels to the jig and then bolt the jig into the cnc instead of directly using hold down clamps. 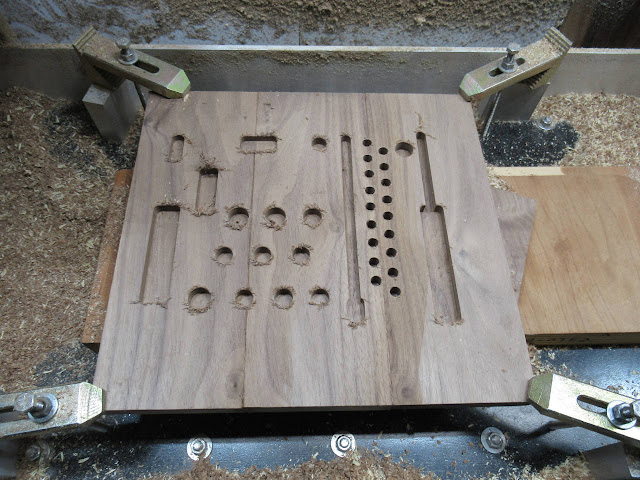 I have planned to use a bandsaw to but a profile around the tools and may end up with some handle(s) on the tray. That part is something I have to think more about. The thinking about how I want the tools to be stored and accessed is an interesting side project.

Posted by monkeyiq at 7:05 PM No comments: