Since I've started doing a little I2C/SPI work I finally got a hold of the gdb of the wire, a logic sniffer. The poor little 8 pin chip in the below is a small EEPROM which I'm doing a read/write cycle to every second from the BeagleBone Black. The sniffer is an Open Workbench Logic Sniffer which is available for around $50. It was a hard choice between that and the more expensive sniffers because a longer capture buffer is usually a handier capture buffer. Though if there are no artificial delays on the bus then I think the OWLS will probably capture the interesting stuff that is happening. 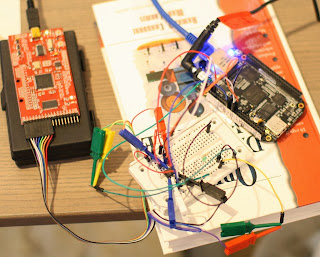 The first trick was to work out how to use triggers in a simple way. Which for me was if I find a 'read' command (byte=3) on the MOSI then that's a trigger. I've told the bone to clock the SPI back to 5khz and the sniffer to run at 10khz which gives me about 2.46 seconds of capture time. So I will surely see two read/write iterations one second apart.

I haven't worked out how to tell the software to ignore lines 1,2,4,5 so they don't show up as noise. So for now those physical snouts are explicitly grounded. After running the SPI analyser in mode 0 I get the below. The only MISO use is on byte 4 where the old value of 0x1 is read from the EEPROM. The activity on the right is setting write enable (0x6) writing the new value (0x2) and then write disable (0x4). Handy to see that chip select is held and released between those three write related tasks as the enable/disable have to be single byte commands where CS is dropped before they are effective.

The conversation is available in byte format in the analyse window shown below. Here you can see the read value go from 3 to 0 to 1. This is because I triggered on the first read, and the first read got back 3 because that is where I stopped the test program last time (ie, it left 3 at the nominated EEPROM address). 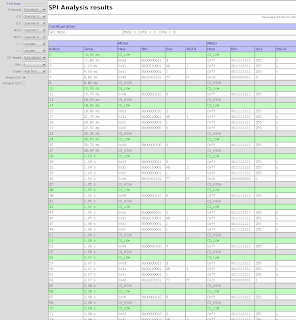 Now to get sigrok to have a sniff too.
Posted by monkeyiq at 8:35 PM