Over the last few years I've been fortunate enough to hack on Calligra and Abiword, adding support for the RDF/XML that can be stored as part of an ODF document. Both suites can also interact with each other, allowing RDF to move over the clipboard along with the text content. 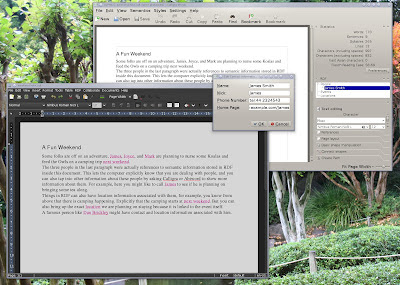 There are some things abiword can do with RDF that Calligra currently can't. These include highlighting the parts of the document that have RDF associated and initial support for capturing relations between things in RDF. Such relationships from RDF can give back to the user right off the bat. For example they can be useful for navigating the document by semantics, moving from a child to their parent, or the cat to it's owner. RDF also opens up document computing to other possibilities like navigating by time rather than by the linear sequence of pages.

I am currently looking to do some more development around ODF. It would be wonderful to do some more indepth hacking on either project as they both have a very nice, welcoming, open source team behind them. If anybody knows of some sponsored hacking floating around for these tools, please get in touch :)

I recently committed a small change to Calligra to move back to using intrusive reference counting for some non graphical RDF objects. While Calligra can use marble to allow editing locations from RDF, I used marble at a level in the calligra stack that isn't optimal, so have to shift that to a plugin to allow it to be easily accessible to distribution builds.

Best of luck! I hope you get sponsored for either (though Calligra would be much better!)