Shown below is the spindle that came with my 3040 "engraving" cnc next to the 2.2kw water cooled monster that I am upgrading to. See my previous blog post for videos of the electronics and spindle test on the bench. 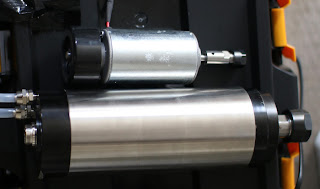 The crossover plate which I thought was going to be the most difficult part was completed in a day. I had some high torsion M6 nuts floating around with one additional great feature, the bolt head is nut shaped giving a low clearance compared to some bolts like socket heads. The crossover is shown from the top in the below image. I first cut down the original spindle mount and sanded it flat to make the "bearing mount" as I called it. Then the crossover attaches to that and the spindle mount attaches to the crossover. 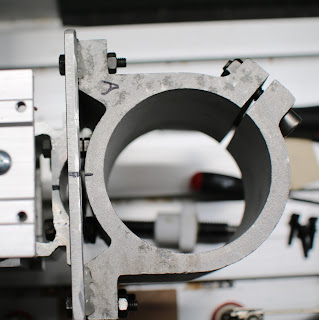 A more side profile is shown below. The threaded rod is missing for the z-axis in the picture. It is just a test fit. I may end up putting the spindle in and doing some "dry runs" to make sure that the steppers are happy to move the right distances with the additional weight of the spindle. I did a test run on the z-axis before I started, just resting the spindle on the old spindle and moving the z up and down. 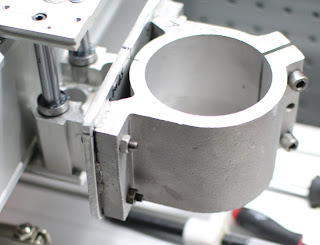 I need to drop out a cabinet of sorts for the cnc before getting into cutting alloy. The last thing I want is alloy chips and drill spirals floating around on the floor and getting trecked into other rooms.

Could you tell me more on how you managed to cut the original mount so it aligned in all directions?

I am a little bit nervous as you only have one shot ;)

Also, is the Z stepper and structure stabile enough to pull the weight of the 80 mm spindle?

Really nice work you have done!

I was also a little taken back when I first picked up the spindle. The Z stepper could still move when I rested the new spindle ontop of the old one so I thought there was a good chance of being ok. IIRC I'm running the steppers at 1.5A/19V.

I just chose a place to cut the original mount. Then started sanding to get it a little more true. There is a video floating around of a guy using a mill to do it right, which would be the better way if you have access to those tools. I just got things reasonably close for a first plate. Looking at the 1mm Z steps that are cut with the mount I think the spindle is not too far from square.

For me, sanding and level gauges were the method to get it reasonably square. No doubt it is not fully square as would be able to be done on a mill, but it seems to work.

I noticed the one shot too, it seems there are not places selling additional mounts. Otherwise I would have bought a second mount and worked on that so I had the first to revert to if things didn't go well.

I did have to calibrate the x,y,z steps/mm a little after the mod. Though the amount is in the less than 1% so it might be that I didn't make large enough things with close enough fits before to notice the slight calibration issue.

The Z stepper structure seems to be holding up so far. Though I might replace part of that soon to give more Z travel than the default.

Thanks for prompt reply!

Then I just need to decide if to go fot the cut or not ;)