The progression has finally reached an upgraded CNC with high power spindle. Things still move around fine to the eye, the next step is likely to do some test drills at known distances to see if the additional weight has had an impact on the steppers that can't be easily seen. 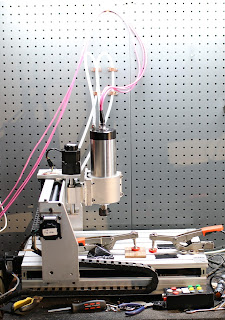 A few interesting times when spinning up to 24,000. At around 320hz there was a new loud rattle. I think this turned out to be resonance with either something that was on the cutting plate or the washers on the toggle clamps.

There is going to be video once this machine starts eating alloy. The CNC needs to be lowered into an enclosure (the easier part) so that chips and the like go into a known location. The enclosure itself needs to be made first ;)

Ironically a future goal is to be going smaller. Seeing if twice the number of microsteps can be pulled off in order to get better precision and cut QFN landing zones on PCBs.